Earlier this summer, I waxed fond and nostalgic about Latin freestyle music and its chapter in Florida's music history because of the notable lineup for Freestyle Fest (May 30, House of Blues). That one was good. But nothing in recent or even distant memory can compare to the end-all one for Super Freestyle Explosion (Sept. 12, Amway Center), which featured a hall of fame parade with Stevie B, Lisa Lisa, Exposé, Shannon, Trinere, Debbie Deb, Nu Shooz, Pretty Poison, Nocera and Connie. Like the recent Firestone reunion, this event scanned the entire length of a genre’s history, cherry-picked its brightest, most definitive novas and loaded them onto one mega bill.

The sobering fact about these kinds of shows – nostalgic reunions in the dance and pop genres – is that they’re never the apex of live performance. There’s only so much you can expect from aging track acts, and that little bit is exactly what most of the performers delivered. From the rust of time, there were almost as many pitch issues in this roster as the Bad News Bears. Some, like Shannon, even got a little batty. 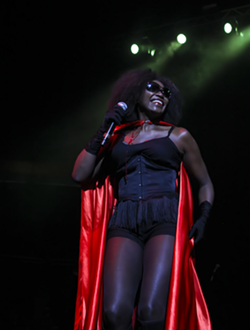 But it did eventually lift off, beginning with Exposé. Though they, too, did a back-tracked performance, they have the heft of three singers who danced respectably with choreography – the seeming least you ought to do for this kind of show arrangement.

Lisa Lisa followed with a decent, full performance with backup singers. Her own voice is still intact, which isn’t too surprising since she always had pro vocal chops unlike many of her one-hit peers.

But Stevie B finally brought a full, legit production that was way above the genre standard with a five-piece band. Even more importantly, his voice was still mostly there. There’s a reason why this Florida boy is called the King of Freestyle. He was always a tier above. In a genre dominated by disposable artists, he had true pop songwriting talent that was pure and astonishingly consistent. Thankfully, his completeness as an artist continues to translate to this very day in his live performance.

He’s been clean-cut for a very long time and still looks good: 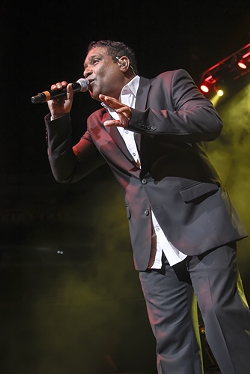 The King of Freestyle: Stevie B at Amway Center (photo by Will Ogburn/You’re Whatz Happening)

But I choose to forever remember him this way:

Although this was definitely a smaller arena show, the tale of its spirit is how much of the staff of this most professional of venues was visibly having fun. I’m looking at you, female usher rocking out on the rear upper section of Level 3. Get it, girl.

But maybe most telling was during “Spring Love” when my show buddy Bob said, “I haven't seen you move this much to a show in years.”