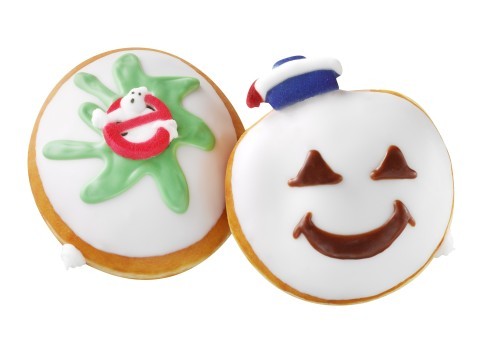 Image via Krispy Kreme Yes, we said Ghostbusters donuts. Beginning Monday, Sept. 29, you can buy one of these super-cute (if villains can be cute) donuts at Krispy Kreme in honor of the 30th anniversary of the Ivan Reitman-helmed blockbuster.  Both donuts are something Dr. Peter Venkman would be proud of, filled with marshmallow Kreme (perhaps leftovers from the great Stay Puft explosion?) and featuring some sort of all-sugar decoration. The folks over at E! got a sneak peek at the pastries and had this to say:

"Quite possibly the sweetest doughnut I've ever had!"

"SUGAR. IT'S SO GOOD BECAUSE OF THE SUGAR." (Editor's note: This employee is currently asleep and drooling on top of her keyboard because of the sugar crash.)

Keep an eye on your local Krispy Kremes; so far none of them can confirm that they'll have the donuts, but given that the promotion is still more than a week away, there's still hope. The film's Twitter account posted a pic of a dozen of the sweet rings earlier this week. It really looks like the Stay Puft Marshmallow Man is judging us for drooling over donut deliciousness: