Afrika Bambaataa I once wrote a college paper that used Afrika Bambaataa to illustrate my thesis. His classic hit “Planet Rock,” besides being one of the freshest tracks to ever be laid down on tape, was a central example of my discourse on the implications of sampling for a legal ethics class. Despite the thoroughly unimpressive C+ I got on it, I thought it was a good paper. But it was probably too much to expect the stiff Southern lawyer that was my professor to fully appreciate Afrika Bambaataa anyway. However, after seeing them live on their “Renegades of Rhythm” tour, I bet DJ Shadow and Cut Chemist (Sept. 14, House of Blues) could’ve moved the good ol’ boy in ways I couldn’t. 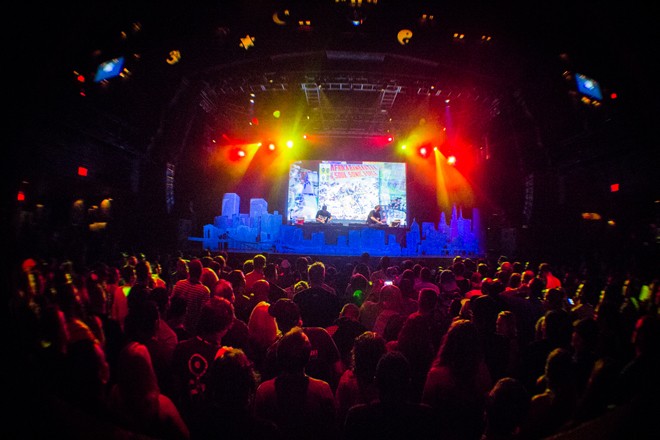 DJ Shadow & Cut Chemist play Afrika Bambaataa at House of Blues (photo by Christopher Garcia) In hip-hop terms, storms seldom come as perfect as this. First, there’s the pairing of two star turntablists on the same stage at the same time – already worth the price of admission. But the reason they’re joining mighty forces here is to tell the story of hip-hop through music. Oh, and they’re doing it through the revolutionarily kaleidoscopic lens of DJ god and hip-hop godfather Afrika Bambaataa by – here it is – using all vinyl pulled straight from the man’s own legendary collection. Yes, yes, y’all, it’s an American cultural trifecta. 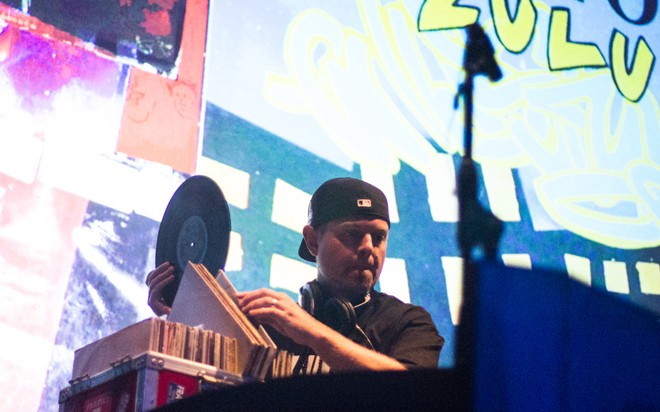 DJ Shadow at House of Blues (photo by Christopher Garcia) In these technologically advanced days, any performance involving the word “DJ” or “electronic” conjures the kind of live opacity that raises the eyebrow of suspicion. However, though lavish, this two-man, six-turntable arrangement was built for and powered by technical mastery, not technological mystery – in other words, flashy but old-school legit. The only other instrumental embellishments were not only manual (DJ Shadow drummed on beat pads) but also historical (Cut Chemist tapped out beats on the same vintage percussion box used by Bambaataa).

Cut Chemist on the percussion box at House of Blues (photo by Christopher Garcia) Essentially, this crate-digger’s ultimate fantasy was two impossibly lucky guys taking Bambaataa’s classic Cadillac of a vinyl collection out for a royal joy ride. But when you’re talking about cats like Shadow and Cut Chemist – pros who handled the hotshot mix odyssey with the heart and mind of disciples – the result is as deep as it is dazzling. From the wildly rich source material (old soul, African music, Latin music, island music, disco, Miami bass, new wave, Kraftwerk, etc.), they chronologically traced the defining roots of Bambaataa and, by extension, hip-hop. They even played super-exclusive stuff like the acetate of Bambaataa’s “Looking for the Perfect Beat” that allegedly no one’s heard before. Visually, their demonstration was framed by stylish video montages and a set of a miniature skyline of Bambaataa’s native New York. Like good guides, the two DJs interjected on the mic – minimally but purposefully – to connect the dots in the musical journey they were taking us on, usually without breaking stride. Though short, their comments illuminated the thoughtful song selections by highlighting the places, people and context behind them. 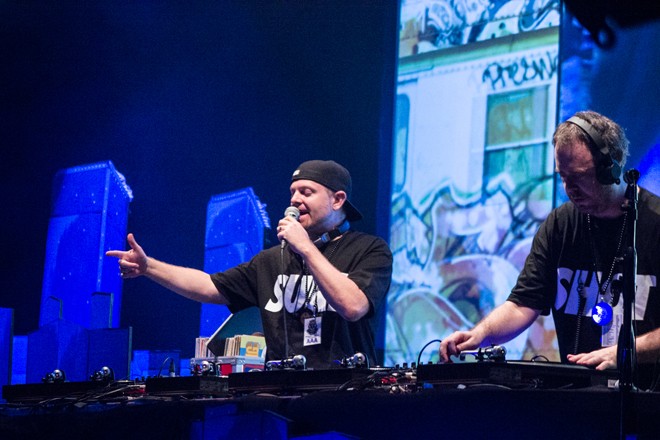 DJ Shadow & Cut Chemist at House of Blues (photo by Christopher Garcia) Several times, the DJs made it a point to note how many of Bambaataa’s records were from Florida. A more contemporary connection they didn’t make that I will is that the indigenous Florida breaks that ruled the EDM scene of the mid and late ‘90s – of which Orlando was the undisputed capital – was in many ways an extension of Bambaataa’s electro bloodline. I’ve got a stack of Floridian records that pulled from the exact same source library that he did (many even directly sampling Bambaataa himself) that back me up on this. 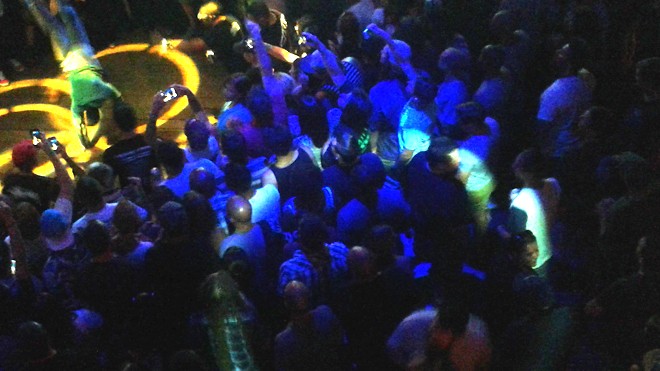 The break circle in the middle of the floor Despite all the knowledge being dropped, don’t mistake this show for some dry-ass lecture. Shadow and Cut Chemist are trick DJs who are modern-day masters at reworking music for maximum crowd effect. On top of that, they’re stepping out as a tag team. So, though this was most definitely a history lesson, it was conducted with the rousing belief of church and the primetime electricity of a party. They had the floor in the pocket and rocking from the jump. Heading into the homestretch, on their mere suggestion, a break circle opened up in the middle of the packed floor and finally revealed just how many B-boys (and some B-girls) were actually in the house. The finale, naturally, was “Planet Rock,” where they both flexed their famous scratch muscles like twin gunners and completely brought the house down.

DJ Shadow & Cut Chemist at House of Blues The performance value of a DJ has long been somewhat justifiably questioned by rockists. Though this show was just a couple DJs, it was one of the most live, immersive and dimensional shows I’ve seen all year. I had the fortune of seeing Bambaataa spin once back at the height of the breaks era at the Edge, and it was a revelation. But this exceptionally conceived demonstration by Shadow and Cut Chemist unpacked all the incredibly complex subtext behind the man and his sound and illustrated it like a splashy, well-mapped mural.