Man your own Jackhammer! Coheed and Cambria perform to sold-out crowd at House of Blues

There’s no way you were at Coheed and Cambria’s sold out show at House of Blues in Orlando Friday night and didn’t bump into at least one person by accident, likely a really sweaty one. I’ve been to quite a few nostalgia evoking shows lately - Taking Back Sunday, Say Anything, Andrew McMahon (Something Corporate) to name a few, but if I were to personify this one in particular and speak directly to it, I’d look it right in the eyes, grab it by the face, and take a line straight from Claudio Sanchez himself, and say “but you, you were my favorite.”

Coheed and Cambria performed In Keeping Secrets of Silent Earth: 3 in it’s entirety. Being their most commercially successful album and reaching a platinum certification in the United States, this was the one that first turned many people on to Coheed, but the second album in both Coheed’s discography and my personal Coheed collection. It was 2003 when that album came out. I was a senior in high school at the time and my friends and I rushed to F.Y.E. in the Paddock Mall in Ocala to pick it up right after school on the Tuesday it was released.

If you’re not familiar with Coheed and Cambria, the band is named after a fictional husband, Coheed Kilgannon, and his wife, Cambria, two of the main characters in a science fiction comic book series that the band’s lead singer, Claudio Sanchez, wrote entitled, The Amory Wars. All of the band’s lyrics narrate their story and struggles with every album being a concept album based on a chapter in the story.

Spoiler Alert: The Amory Wars are about three species: Mage, Prise, and Man who were given a structure to live on by “God” devised of two parts: Heaven’s Fence and The Keywork. Heaven’s Fence is a collection of 78 planets aligned in a large triangular pattern, held together by a visible beam of light which provides essential elements to each of the 78 planets making them all inhabitable. This beam of light is known as The Keywork, and is powered by seven circular power star transformers know as The Stars of Sirius. The overview of The Keywork and The Seven Stars of Sirius are the band's emblem:

The song “The Crowing” is named after the character Claudio Kilgannon, who is Coheed and Cambria’s only surviving son and the true “messiah” of the story. Claudio learns that the Keywork is comprised of souls passed on from life in Heaven’s Fence and his goal becomes to destroy the Keywork and free all the souls that it’s comprised of (after all, if you’re going to start a band based around a fictional story, why not write yourself in as the hero). There’s a shit-ton more to the story and it’s rumored that a movie is in the works. Check out The Amory Wars website for more.

The opening band, Thank You Scientist was a seven-piece with a machine gun of talent. They had influences that ranged from classical jazz to psychedelic metal and according to their website, “they collectively play some 20 instruments.” They just signed onto Claudio’s Evil Ink Record label and are expected to debut a full-length in 2015. Keep your ears out for these crazy guys!

The sound was most certainly on Friday night, unlike the Bastille show. There was also an excellent choice of queued songs played over the PA between the opening band, Thank You Scientist, and Coheed. I definitely heard The Get Up Kids and some Glassjaw.

The first song Coheed and Cambria performed was the opening track and title track to IKSSE:3, and it runs over eight minutes long. When the drums cracked in after the intro, I couldn’t help but stare in awe at the bands emblem which lit up behind them, wildly flashing along with the other erratic white lights beaming from the stage. 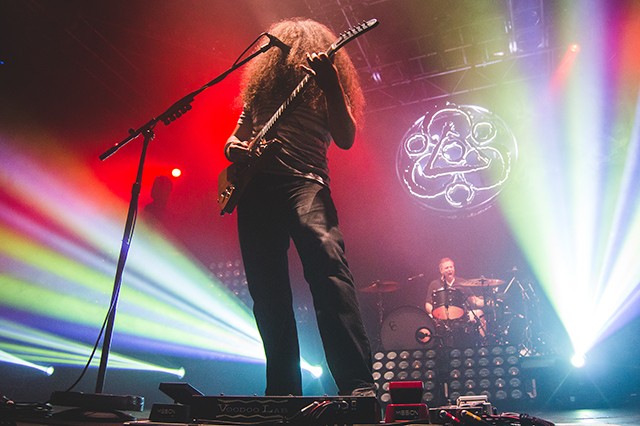 The first time I listened to track “In Keeping Secrets of Silent Earth: 3” after purchasing the CD I was a little confused. I thought I had accidentally set the song to repeat because at the 6:32 mark, the song fades out before returning back to the guitar intro, seemingly starting over. But then it takes a turn and begins building up into an howling, anthematic rock climax of chants and harmonies. The elbow thick crowd made it well known that they were there to howl and scream along during that part, and Coheed paused for the audience to unitedly scream “Man Your Own Jackhammer!”

Their drummer, Josh Eppard’s open hand drumming style is one of my favorites. I must mention his technical high-hat stomps during the title track of In Keeping Secrets of Silent Earth: 3 which gets every drummer I’ve ever known into a full freak out. You can hear it best on the studio version of the song. I’ve read that the songs on the album were not played to a click-track nor programmed via “beat-detective” using Pro Tools, but instead, they were performed naturally. And if a groove worked, the song was build upon it (the way I believe a rock record should always be made).

Just as the white strobe lights were getting too bright to continually look at, they changed the mood and brought in deep reds and purples to play against the fog.

Claudio was rocking harder than ever! He was so caught up in his rock-mode that he didn’t speak to the audience until he was nine songs in. He stated “this tour we’ve been getting a lot of great reviews. But not about the band playing, mostly about the crowd’s reactions to the songs. So, thank you!” Then Josh counted them into “A Favor House Atlantic” and the room exploded. Oddly enough, I remember that song’s lyrics helping me through a breakup. No, not the “good-eye sniper, I shoot, you run” line. It was the “bye-bye beautiful, don’t bother to write” lyrics that started mending my eighteen year old broken heart. Here’s a shitty video I took on the Shows I Go To instagram:

Coheed continued through their set to an eager audience, performing the entire album in sequential order. They even played the bonus track, if you will, “21:14!” Which is a ten minute montage of a song at the end of the record. It was a perfect ending to the live performance of the album. Everything seemed to fit into place as the audience echoed “IRO-bot will never die” and the lights faded to black.

Coheed came back out for the first of two encores, performing one of my favorites from The Second Stage Turbine Blade, “Neverender” (which was also what the tour was named after). Unfortunately, this was the only song performed from their debut album.

Claudio then gave us some insight into why the opening band, Thank You Scientist, was chosen to perform with Coheed throughout their tour: “I used to listen to this band while running around Prospect Park in Brooklyn, in hopes to lose weight or something. And I enjoyed them so much, I signed them to my record label and brought them out on tour.”

Members of Thank You Scientist were then invited out to perform the horns sections in “Number City,” which starts off as a dark electro-pop song and, if you’re not familiar with Coheed’s latest efforts, could have easily been mistaken for a cover.

I often like to zoom-out when I attend concerts to see how the room is responding to a performance. I did so during “The Crowing” when the lights were at their brightest and noticed a lot of passionate faces singing along, "you were my favorite." I also noticed those who weren't shouting towards the stage, almost all of which had wide smiles plastered across their faces. It’s safe to say Coheed and Cambria can still pollinate a room with their contagious energy.

They closed their epic set with the symphonic, progressive rock ballad “Welcome Home” and Claudio wielding a double neck guitar, playing it behind his back, with his teeth, and pointed towards the sky without hesitation nor skipping a note.

I think the only part I disliked the entire evening was walking back to my car across the street from Downtown Disney, in the rain, while Kesha was playing over the speakers lining the dim walkway. I’m not sure what part I disliked more, the actual "music" coming out of those speakers, or the fact that I knew that "music" was Kesha or Ke$ha, however it’s stylized now.

I would have been right down in the pit the whole time, like I had a decade ago, with my friends. But I knew it would've been impossible to takes legible notes with one fist in the air and a single finger pointed towards the sky, screaming “Man Your Own Jackhammer” back at Claudio’s massive and iconic fro.