MAP: Which food does Florida Tweet about the most?

Image via University of Arizona

University of Arizona researchers fell deep into a hashtag researching rabbit hole to find out which food each state talked about most on Twitter. We gotta say, we're kind of surprised by the results in Florida. We are, apparently, part of the grits belt of the South. Yup, here in Florida, we light up Twitter with talk of grits. Not oranges, not Key Lime pie, not supremely sweet rock shrimp: grits.

Now, don't get us wrong, we love grits. In fact, they're a Florida ingredient, milled on-premises at Bradley's Country Store in Tallahassee (you can find them locally at Local Roots at East End Market.) You can also get killer plates of shrimp and grits all around town at places like the Coop,  Marlow's Tavern and Tibby's New Orleans Kitchen. Or, if you're so inclined, you can make your own; we've got a great recipe here.

Let's take a look at some of those other states through. We're worried about you, Kansas and New York. Why all the prune talk? And Indiana gets super-specific, not just tweeting about #eggs, but #yolks. We agree, Indiana, yolks are the best part. Kentucky knows what's up, though: talkin' about tacos.

If this surprising revelation that Florida tweets about grits more than any other food has thrown you off balance, the map below (from Cooking Channel TV) should calm you. It shows which dish best represents each state. Florida's no shocker here; we're well-represented by Key Lime pie. 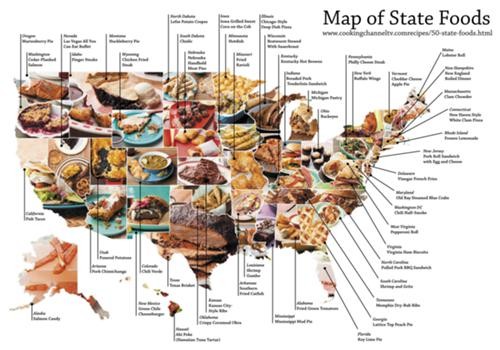