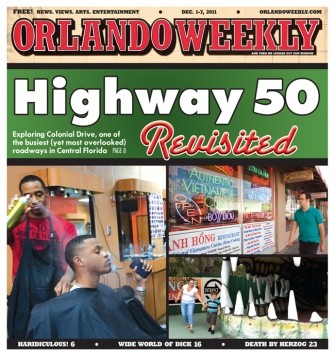 In 2011, Orlando Weekly profiled Strictly Skillz as part of the Highway 50 Revisited package about living and working on Colonial Drive. Back in 2010, the Orange County Sheriff's Office embarked on a series of bizarre, over-the-top raids on barbershops in Orlando. With the assistance of the state Department of Business and Professional Regulation, the sheriff's department stormed nine different black and Hispanic-owned shops, claiming that they were looking for illegal goods – mostly drugs, guns and evidence of gambling, they said at the time. They handcuffed the barbers working at the shops, asked to see their licenses and searched their work stations, demanding to be told where the drugs and guns were stashed. After the raids were completed, it became clear that law enforcement didn't find much at most of the shops. With the exception of one of the shops, they turned up a little bit of marijuana here, some license violations there. But it was devastating to the business owners. When we talked to the owner of Strictly Skillz, one of the raided shops, he said the raids had made a significant dent in his business, even a year later. The owner of Strictly Skillz filed suit against the county over the sting, claiming that it was an unlawful search and a violation of his Fourth Amendment rights protecting against illegal search and seizure. On Sept. 16, a circuit court determined that two of the officers who executed the searches could not be considered immune from being sued because they were just doing their jobs. In the court's decision, it reveals that the Orange County Sheriff's Department teamed up with the Department of Business and Professional Regulation to aggressively inspect a number of shops that had been resistant to previous routine inspections – in other words, the sheriff's office was helping the department get back at the shops for being difficult with them. The court ruling indicates that the court agrees that the search of Strictly Skillz was unconstitutional, and it denied the request by the Sheriff's Department to dismiss the case or offer summary judgment in favor of the county. Read the court filing below. It's full of some very unflattering information about how the 2010 raids were conducted.