Letters to a Satanist: why do you call yourselves Satanists? 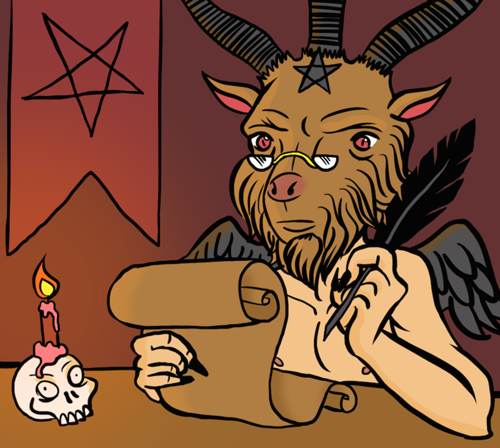 Recently, Metro Times, our sister paper in Detroit, unveiled a new column called Letters to Satan. Readers are invited to submit questions about Satanism to be answered by Doug Mesner, a spokesman for the Satanic Temple. Since the Satanic Temple has been so active in Florida in the past couple of years (they rallied for Gov. Rick Scott last year, and more recently, they've been saying that they'll be handing out literature at Orange County Public Schools), we figured we'd run some of the letters, too. Here's the first installment. Let us know what you think in the comments below.

The Satanic Temple claims not to believe in the Devil. Why do you call yourselves Satanists?

This question is often the first to trouble and confuse the minds of the many who feel that Satan universally represents all that is horrific and anti-human, and that “religion” belongs solely to the superstitious.

Ours is not the Satan of medieval witch-hunting mythology, but the eternal rebel in opposition to tyranny – the literary Satan best exemplified by authors such as Milton, Blake, Shelley and Anatole France. The self-identified Satanist embraces their outsider status and is drawn to the forbidden, anomalous, and the hidden. We identify with the symbolism of “blasphemy” as an expression of liberation from superstition. We bow to no God, or gods, and we reject all arbitrary edicts and unjust authority.

We have no concern or sympathy for those who wish to preserve the myth of a Satanic cult conspiracy lurking underneath the surface of society, working dutifully toward destruction of the Common Good. If history has taught us anything regarding false allegations related to witchcraft and Satanism, it’s that the most horrific evil has always taken place when “good” people are moved by delusional fear to purge their community of a maligned “other.”

Contrary to popular perception, I argue that religion cannot be defined to require a belief in the supernatural. At its best, religion provides a narrative context, sense of purpose, symbolic structure, identity, values, and a body of practice. Religions enjoy certain privileges and exemptions that would be reprehensible – in a pluralistic society – to reserve for supernaturalists alone. While we reject superstition, our values are no less sincerely held. And while we view Satanism in metaphorical terms, our tenets and symbolism are far from arbitrary.

In short, we call ourselves Satanists because Satanists we are.