The best parts of the GQ story on George Zimmerman's family 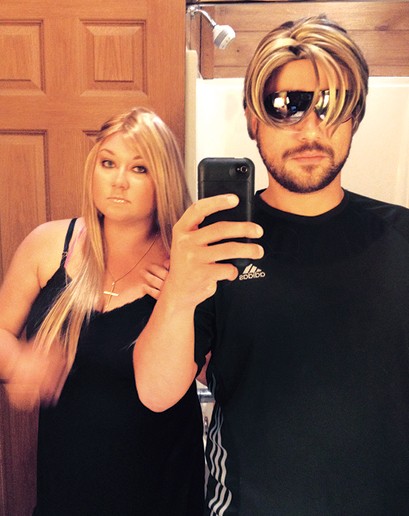 Photo of Photo of Robert Zimmerman and Shellie Zimmerman trying on wigs via GQ.

Have you read this month's GQ article about George Zimmerman and his family, and how they're living their lives more than two years after Zimmerman shot Trayvon Martin? It's definitely one of those can't-look-away-from-the-trainwreck kinds of stories, and for those who like that kind of thing, it's a half-hour of pure drama made for reality TV – Here Comes Honey Boo Boo meets Keeping up with the Kardashians with a little bit of Doomsday Preppers thrown in for good measure. It's no wonder George Zimmerman's brother, Robert, at one point suggested that the family try to cash in on some reality TV action to make some money and rebuild their image (something revealed in the story).

Check out these excerpts below. Then, by all means, go read the story and get the complete picture painted by writer Amanda Robb.

On Robert Zimmerman's idea for a family business to rebuild the family's image:

After George was found not guilty of second-degree murder in July 2013, Robert began thinking about how to accelerate the Zimmerman rebranding project. There had to be a way to capitalize on George's notoriety. A family business, maybe. He and his mother had an idea: George could be the frontman for a home-security company called Z Security Products. "They all start with Z," Robert explained, walking me through an imagined product line. "There's the Z Bar, the Z Rock, and the Z Beam. They're all targeted to women. One is to secure sliding doors. One is to put in the front door. The light is to carry and is designed by George. It has a little alarm—you know, Help me, help me!"

On the writer's plan to visit the Zimmerman family at their home for this story:

We even got so far as to negotiate terms of my visit in order to preserve their security. I would have to wear a hood while they drove me from my hotel to their house, and I would have to leave my cell phone behind. Grace, in particular, was alarmed about my phone's GPS capabilities, which I could use to pinpoint their location. I agreed to all of their conditions—I did tell them that I thought the hood seemed a little Abu Ghraib-y, so we compromised on a blindfold.

On the Zimmerman family's attempts to create a "system" to protect themselves:

They watched the movie Argo to learn how to live like CIA. Code names for everyone. No mail delivered to the house. No visitors. No talking to the few neighbors they had. No long phone conversations — keep it short and vague to outwit surveillance. Never discuss your whereabouts via phone or text. Keep a weapon close by at all times. [George's brother] Robert slept with his gun. Still does.

And in case someone–or multiple someones–decided to mount an attack on the house, the Zimmermans pre-packed their own ‘go-bags’ filled with everything they would need to flee in a rush, as well as what they called ‘footballs’ — like the one President Obama has with the nuclear codes–that contained laptops, cell phones, and other essential electronics.

On what George is doing these days:

George, unbelievably, seems to be back in neighborhood-watchman mode; this summer the police found him sitting in his truck outside a friend's motorcycle shop in the middle of the night.

On a lark, he gave painting a try, and the first canvas he ever put up for sale, a blue-toned American flag, scored $100,099.99 on eBay. His second painting, though—a portrait of the prosecutor in the Martin case, Angela Corey, that he might have copied from an Associated Press photograph—earned him a cease-and-desist letter. That seems to have soured him on his budding art career. He and Robert have talked about possible subjects for his next painting—Robert proposed killer whales; George suggested Anne Frank, because, according to Robert, he identifies with her—but he hasn't gotten around to it yet.

On a trip to Miami to be interviewed by CNN:

George agreed to another media stop, this time on CNN. It would tape at the Ritz-Carlton in Miami. The network agreed to pay for two hotel rooms for three nights and, according to Robert, "everything" they wanted during their stay. (For this article, George refused to speak with me on the record unless GQ provided a similar hotel room—he asked for a week's stay—but the magazine declined.)

The Zimmermans seized on their brief stint of subsidized luxury. They ran up a big room-service bill, cleaned out the minibars, got their clothes laundered, made several trips to the spa, treated a party of ten to dinner at the hotel restaurant, and bought swag—from bracelets to bath fizzies—at the gift shop.

Toward the end of their stay, according to Robert, a manager presented him with a bill for $3,600. He says he called CNN, outraged, only to have the producer accuse them of splurging shamelessly on CNN's dime. "You and your brother are evil!" he remembers her screaming. The hotel manager threatened to call the police. Alone in his room, Robert started shaking. He wrapped all the blankets around him, ordered shrimp, chain-smoked cigarettes, got roaring drunk. Nothing helped. He called his mother in a panic. "I can't get warm," he sobbed. "I just can't get warm."

And finally, even though the story explains how broke and in debt the Zimmerman family is broke, living in fear and that all three of the adult Zimmerman children are unemployed, we learn that the Zimmerman parents are paying for an apartment for Robert Zimmerman in Washington, D.C. Rober, meanwhile, spends his time lamenting his sort-of famous lifestyle:

It dawned on Robert that he'll "never be able to fuck somebody without thinking, What's going to happen? Are they recording me? Did they leave their laptop open? Is this being broadcast live?