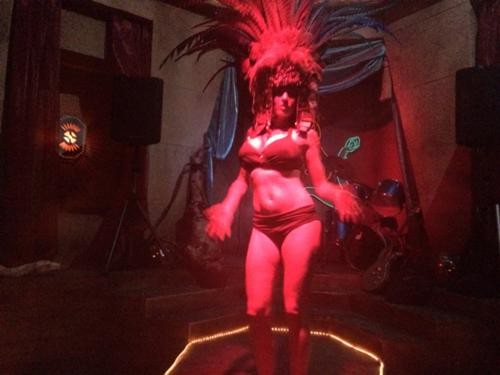 In the issue of Orlando Weekly hitting newsstands today, you'll find my Halloween Horror Nights hit-list, containing both praise for the 24th edition of Universal Orlando's haunted event, and some pointed suggestion for its future. Something I didn't have space to mention in the print edition is just how enthusiastic -- for good or ill -- the fans HHN has earned over the past two dozen years can become over Universal's fright francise. Case in point: as my column was being written, two minor Halloween Horror Nights controversies bubbled up in some of the unoffical online fan forums and Facebook groups that flourish around the event. While the vast majority of HHN attendees will likely never be affected by these issues, I took their concerns direct to the source, and got some official answers from Tom Schroder, Universal's head of Public Relations.

On the second Saturday of Halloween Horror Nights 24, winners of The Compound's first contest were invited to an in-park "recon mission," including a private party at Hard Rock Hotel with Face Off season 7 contestant David "Doc" O'Connell, and a private tour of the Halloween maze with designers Mike Aiello and T.J. Mannarino. The event was a great success according to all who attended (see this recap from Behind the Thrills), but eyebrows rose among some not attending, who noticed a number of bloggers and theme park media among those attending. As the terms and conditions of the contest specified it would be decided by a random sweepstakes among entrants, any accusation that the results were manipulated to secure positive media coverage could be serious.

The real story, according to Schroder, is that "the people at the event included a combination of random winners – as was our goal – along with a group of invited bloggers." As an attendee at many Universal media events, I can confirm that they often contain a combination of invited media and contest winners from the general public. However, at events conducted by the public relations department there is generally a clear demarcation between the working press and winners, whereas the bloggers who attended that I contacted weren't clear whether they had won (since they had entered the contest legitimately) or were invited media. Universal declined to release any specfics regarding the breakdown of winners vs. media attending, which is consistent with their standard policy.

The second source of consternation among HHN fans was the apparent cancellation of the Voodoo queen human sacrifice show, which was staged hourly in the Bayou of Blood scarezone during opening weekend. Thanks to the rain, my media tour didn't get a chance to see it live, but from videos (like the following one from Orlando United) it looks like it was one of the more aggressively transgressive elements of the event:

Unfortunately for anyone looking forward to experiencing the sacrifice in person, the performances were gone by the start of HHN's second weekend. Rumors quickly ran rampant in online comment threads that it had been censored due to complaints over the content, presumably from those with religious or moral objections to the intense depiction. In truth, the sacrifices were stopped due to guest responses, but not of that type. "This was a creative decision, said Schoder. "Our entertainment team makes a lot of real-time creative decisions as they watch guests interact with the experience they create for them. They add things, they remove things, they modify things – all in the interest of making for a great guest experience."

For clarification, I turned to the event's creative director Mike Aiello, who informed me that his team made the decision not out of desire to avoid offending, but to increase the consistency of scares. The show's cancellation, according to Aiello, "was an effort to increase the Scareactor to guest interaction in the zone. Based on the majority of guest feedback we received from opening weekend stating that the Mel's [Drive-In] area felt inactive, we made a creative change and based on the majority of this weekend's feedback it was a positive change for the zone." The actors formerly involved in the intermittent sacrifices have instead been redeployed to roam the area for more continuous spooking, reportedly resulting in markedly higher guest satisfaction scores after the change.

While both of these virtual teapot tempests turned out to be less than meets the eye, it must be a double-edged sword for Universal to have such a rabidly attentive audience base observing their every move; despite some grumbling over this year's upcharge dessert party, Disney's online fandom seems far more acquiescent when Mickey makes adjustments to his Not So Scary Halloween party. Even so, expect the HHN creative team to continue tweaking the event as we roll into October; I'll be attending this Thursday with eyes open for any additonal updates.