This Little Underground: Belle and Sebastian at House of Blues

Belle and Sebastian at House of Blues (photo by Jim Leatherman) A little history was made this week. Besides being the biggest indie name to roll through town, Scottish darlings Belle and Sebastian – with this Orlando appearance (Sept. 29, House of Blues) and the Miami one the night before – finally played their first ever Florida shows. Exciting, right?

Stuart Murdoch being Scottish as fuck (photo by Jim Leatherman) Well, it came out during the show from the man himself that frontman Stuart Murdoch is married to someone – Marisa Privitera Murdoch – who’s from the area. Instead of namechecking Disney like every goddamned musician seems to think they’re the first to do (especially when playing HOB), this guy drops places like DeLand, DeBary and Volusia County. Apparently, that’s why he had lots of family in attendance. The band even honored a song request (not a B&S song but rather Elvis’ “Love Me Tender”) from his mother-in-law (sup, Gladys!). At first blush, it’s a cool local epiphany. But then up creeps the obvious question: Wait, WTF took you so long to play here? Seriously, Stu, you couldn’t have peeled off even a solo show at the Social while here during the holidays or something? Once that reactionary sting subsides, however, realization of the occasion snaps back in. And having twee-pop royalty in town for the first time is a pretty big deal. So let’s get adorable, y’all. 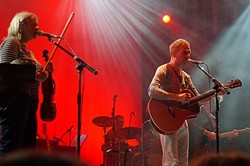 Belle and Sebastian at House of Blues (photo by Jim Leatherman) In addition to an already full core septet (that includes organs on top of the standard rock array), Belle and Sebastian came packing a five-piece dedicated orchestral section that sometimes stretched to seven. For a pop band especially, this is live ambition of another degree. Unsurprisingly, they sounded pretty beautiful. With all that talent and personnel, their playfully literate music was rendered with real, organic grandeur like a band of jangly, restrained Bacharachs. 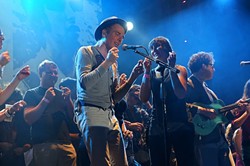 Belle and Sebastian getting up-close and personal with fans at House of Blues (photo by Jim Leatherman) But just when they’ve gotten everyone content to enjoy the warm but polite splendor of a show well played, the band shatters the big-venue formality and invites anyone and everyone up on stage to dance to fan fave “The Boy with the Arab Strap,” a song that has always packed the floor at I-Bar. This, of course, triggered a bit of a stampede, as much of a stampede as pop nerds can muster anyway. But it was a sight and made a lot of people’s nights, that’s for sure. Here's the scene: [youtube_sc url="http://youtu.be/SuC5CGSHF1o" autohide="1"] Although they’ve proven to be some of modern music’s finest popsmiths, the increasingly unprolific Belle and Sebastian haven’t really flexed their presence in years. But this big performance was a very good beckoning back into the breeze and insouciance of their enchanted realm. Like a conceptual, immaculately styled vignette stretched into not just a long music career but an enduring state of being, they’re the soundtrack to a world that’s a few inches off the ground and just beyond reality. Who wouldn’t be eager to return to a place like that? Fortunately, with a new album (Girls in Peacetime Want to Dance) that’ll finally see U.S. release on January 20 on Matador Records, Belle and Sebastian is back. Read more This Little Underground: