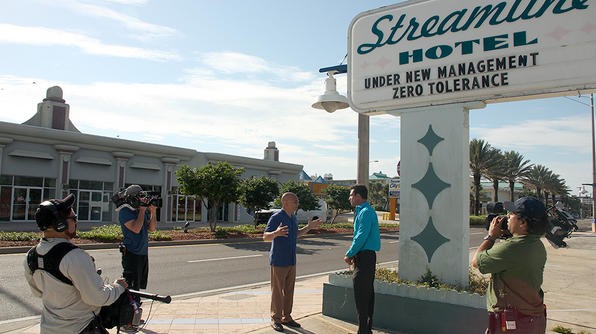 Image via the Travel Channel

Local ad agency Think Creative will be featured on tonight's episode of the Travel Channel's Hotel Impossible. In the season four premiere of the hotel makeover show, hotel fixer Anthony Melchiorri tackles the Daytona Beach Streamline Hotel. The show takes struggling hotels and makes extensive improvements to both the look and operation of the properties. Part of these upgrades often include branding and additional marketing work.

As part of the Streamline Hotel's makeover, Think Creative developed all new marketing materials for the hotel, as well as creating a new brand. Additionally, the agency offered up $100,000 worth of consulting work to for the hotel to use long after the Hotel Impossible cameras are turned off. Look for the agency's president and creative director Mark Fried and associate creative director Diane Levine in the episode, which airs 9 p.m. Tuesday, Oct. 7 (that's today!) on The Travel Channel.

Watch a clip from the episode below: