U.S. Reps., including Alan Grayson, call for restrictions on travelers from West Africa 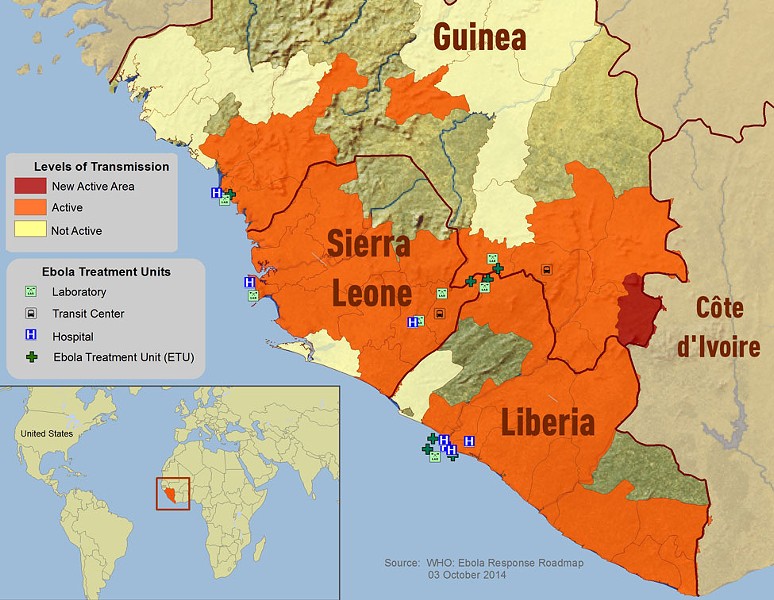 2014 Ebola Outbreak in West Africa - Outbreak Distribution Map, via the CDC Today, U.S. Reps. Alan Grayson (D-FL), Steve Stivers (R-OH), Ted Yoho (R-FL), Robert Pittenger (R-NC), and 22 other Members of Congress sent a letter to President Barack Obama urging him to consider stronger restrictions and screening of travelers to and from West African countries experiencing outbreaks of Ebola. The letter, dated Oct. 8 – the day the first Ebola patient diagnosed in the United States, Eric Duncan, died – tells the president that he should take "immediate and decisive" action to control the spread of the deadly virus in the United States “We urge you to direct the CDC, in coordination with the Department of Homeland Security, to order our customs and border agents to begin more active screening of travelers to and from affected countries in West Africa, to prevent further exposure to Ebola in the United States,” the letter says. “Furthermore, these agencies should also consider a possible quarantine for any individual who has traveled to or from affected countries in West Africa within the dormancy period, aside from responsible health and military personnel sent there to fight the disease, to ensure that they have not contracted Ebola and are not contagious. Lastly, we ask the State Department to impose a travel ban and restrict travel visas issued to citizens of the West African countries experiencing this epidemic, until such countries have defeated the epidemic.  Such a ban should be instituted by suspending earlier-issued visas until further notice, halting the issuance of such visas, and denying entry to the nationals of such counties upon presentation of a passport from those countries at our ports of entry.” Grayson made a similar request of Secretary of State John Kerry in July, asking him to impose a travel ban on travelers from Guinea, Liberia and Sierra Leone, but obviously that hasn't happened. “We note that Congressman Grayson made this request to your administration in July, and that 27 African countries already have taken such action to protect their own citizens, but the United States inexplicably has not,” the letter says. NBC reports that a "majority" of Americans who participated in a poll favor such a travel ban. The argument against a ban, says Centers for Disease Control director Thomas Frieden, is that it simply won't work and it would limit the ability of aid workers to provide assistance in places where it's most needed. And if the virus is not brought under control in places like Liberia, he says, it will continue to pose a risk to the United States.