Amway or the highway: Rick Scott greeted with protest at latest Orlando fundraiser

SOOOOO, this afternoon/evening, we had the pleasure of watching Gov. Rick Scott drive by in an SUV with his blazer hanging in the back of a Blazer or whatever, which is always a good time. Also essential, though, was that while Scott was (likely) visiting with UBER Republican Rich DeVos who owns the Orlando Magic in order to scrape off some funding, a crowd of about 50 piled on outside the Amway Center to let him know how unhappy they were. Sponsored in part by Organize Now, with help from Women are Watching and NextGen, the protest aimed to let Scott know that people aren't exactly buying his smoothed out image, especially without Medicaid expansion or anything else resembling philanthropy. There were numerous chants and quite a bit of certifiable anger messages ("I can't believe I still have to protest") read one sign. Some suits with hairplugs stumbled around the Amway "spire" trying to find their way in. The whole thing was pretty depressing, at least on the Republican side. At issue here, of course, was Scott's inability to expand Medicaid, the fact that Duke Energy is making money off of customers when its nuke plants are dying/dead, the minimum wage, equal rights: the whole gamut. Whether Scott was worried by the protest remains to be seen. Actually, he's probably immune to this by now. 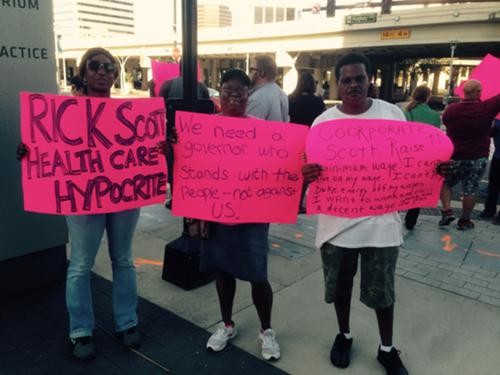