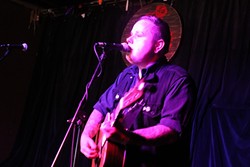 Since the young alt-country scene is crowded with refugees from other, heavier genres (particularly punk), many of the singers have adapted the sound of country to their established styles. But bright Midwesterner Austin Lucas is different. Although he too comes from a heavy music background, his sterling, heaven-reaching voice rings through with the clarity and conviction of true American folk roots. Daringly traditional and uniquely gifted, Lucas owns one of today’s finest, purest country voices.

Several years ago, he hung around town a lot. At that point, he was a bundle of potential just beginning to make a name in the underground. Now he returns as a signed man on primetime Americana label New West Records for a headlining show alongside contemporaries Jayke Orvis, Jon Snodgrass and Northcote (Oct. 12, Will’s Pub). And, man, was it good seeing him on an Orlando stage again. His shining performance just reaffirmed things we’ve known about him and have been proclaiming for years now, things that thankfully more people are awakened to now.

Drag the River’s Jon Snodgrass, however, is one guy who’s kept his honorary Orlando citizenship current, usually touring through with Cory Branan. During his typically warm set, the audience – OK, one girl mainly – kept shouting out requests and he kept obliging them. 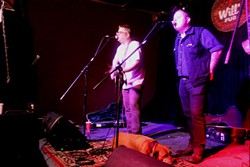 As a former member of Milwaukee’s .357 String Band, Jayke Orvis has the kind of outlaw bluegrass pedigree that involves lots of edge and tattoos. So it’s no surprise that he was, by far, the night’s sharpest picker. The man shreds on mandolin. 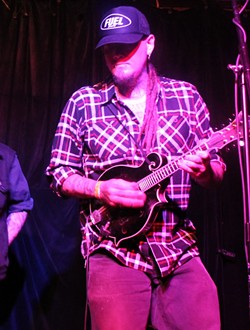 One of the signature show strategies of this scene is fraternal conspiracy. This one, just like Chuck Ragan’s Revival Tour, was a showcase of overlapping sets elevated by collaboration and the economies of collectivity. The deepest collaboration was between Lucas and Orvis, whose desire to work together is what sparked this tour in the first place. As different as their sensibilities are, Orvis is an optimum partner for Lucas. The former’s crisp bluegrass instrumental style is an ideal frame for the latter’s beautifully orthodox voice. 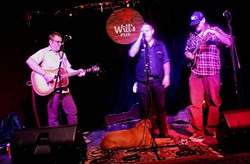 But it was an off-script thing that really illustrated just how tight-knit and neighborly this alt-country scene is and how special that quality can make these shows. Knoxville country-rocker Matt Woods, another celebrated out-of-towner who’s become part of the local fabric, was in attendance, just hanging around town until his own headlining show later in the week with Johnny Knuckles at the Milk Bar (Oct. 17). Lucas announced his presence and then summoned him to the stage, where they dug into a George Jones song together (“Why Baby Why”) before giving Woods the spotlight for a bit to play one of his new songs.

To close out the show, Lucas and Orvis went down onto the floor and went fully unplugged, in a move that was both folk and punk at the same time. And with a warm campfire finale that brought all four billmates into a performing huddle, it was the most human of concert experiences.