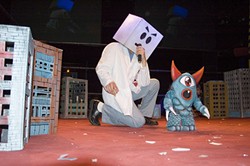 Kaiju Big Battel has been menacing the universe for 20 years - pitting fierce monsters hatched by the evil genius of Dr. Cube, like Sky Deviler and Hell Monkey, against each other and heroes like Kung-Fu Chicken Noodle to control their maniacal rage and keep humans like us safe. But now the rage will be uncaged in Orlando on Halloween night as part of Kaiju Big Battel's 20 Years of Mayhem Tour at Capoeira Brazilian Pelourinho, 7075 Kingspointe Pkwy, at 7 p.m., Oct. 31. (You can get tickets here, it's kind of a hard event to track down!)

It's an over-the-top wrestling exhibition that's hilarious and visually insane with mini-city set designs that get smashed in the struggle. See for yourself: