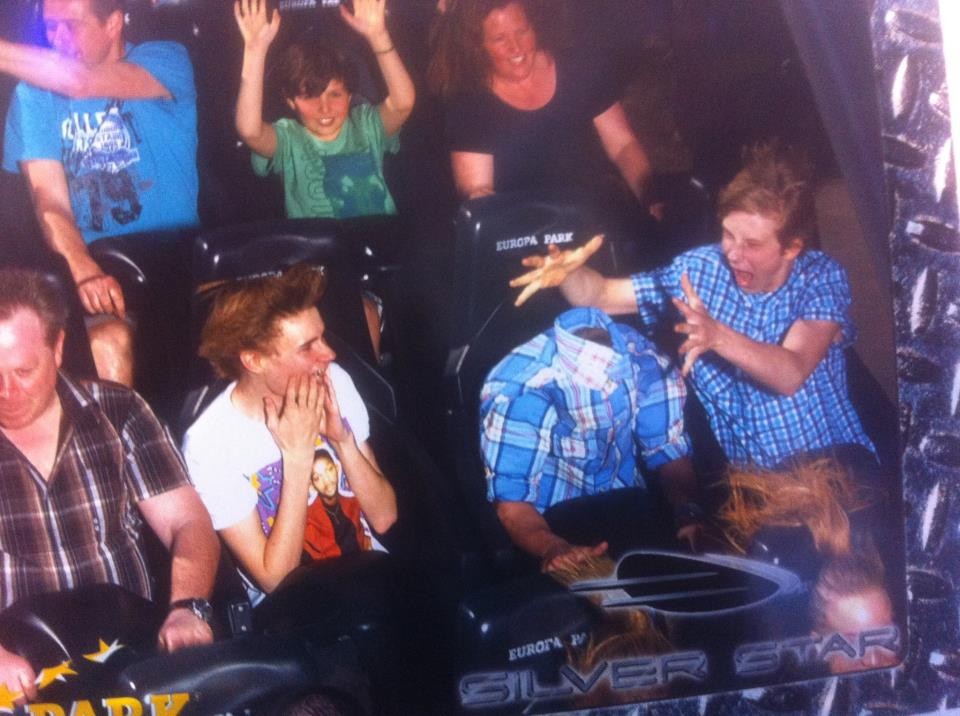 Yesterday, Reddit asked theme park and carnival workers to share some of their most unbelievable stories in a Reddit AMA. Some of the answers might make you reconsider riding a theme park ride ever again. Here are some of the wildest:

1. TL;DR - Irresponsible parents nearly got their child steamrollered by a roller coaster, then nonchalantly walk off as if nothing had happened.

"I'm a supervisor at a small amusement park, and one day I was operating the roller coaster when this Russian family gets on. The mother along with her 2-ish year old daughter sit in the front and the dad in the car behind them. Now, there is one bar that comes down over both people in a car, so since the bar only came down to the mothers lap, there was a lot space between the baby and the lap bar (It's not usually a big deal, the coaster doesn't go upside down or anything like that). Now, halfway around the loop, the baby gets up on her knees and turns around to smile for her dad. The parents don't seem to care, and keep taking photos. So when the train comes back into the station, I tell them that the girl needs to sit down and blah blah blah. So I send them up again, and this time, halfway up the chain the girl stands up on her feet! Right as she does so, the coaster jolted forward, and the girl fell backwards out of the car. My heart fucking stopped. I slammed the emergency brake, but it was too late, the coaster was on its own. Somehow, the mom managed to grab the girls ankle, and pull her in right before her head smacked the coupler. The worst part is, they kept laughing and taking pictures as if nothing had happened! When the train arrived, I told them to get off and not come back. This happened a year ago, and I still hold it as my most traumatic life experience, even though it wasn't my life at risk.

TL;DR - Irresponsible parents nearly got their child steamrollered by a roller coaster, then nonchalantly walk off as if nothing had happened." - alamistx

"Worked at an amusement park, with a roller coaster that was enclosed, in a "future" part of the land and the ride was shaped like a hill or some other type of large natural structure.

There is a reason you can be "too tall" for a ride. I think it's 6"4 or 6"2 and to keep your arms and legs at all time. The person was on the ride and had his hands straight up, typical roller coaster form. His finger hit one of the metal rafters and a bolt in the rafter caught his wedding ring. This flayed his skin right off his finger.

The mouse in charge does a very good job hiding these type of accidents for both bad publicity and OSHA fines/statistics.

Needles to say I don't raise my hands to the sky when I'm on a roller coaster." - Cloud_Chasre

"I used to work at an amusement park where they had sesame street characters. One day big bird showed up drunk and puked inside the costume. He got fired. They needed someone to be big bird later in the day. I worked nearby, but not as a character. Somehow they chose me. It's awkward wearing an 8'2", 65lb costume. You look through some mesh in the neck area of the costume. It's hard to see. There's a contraption that comes down from the head which controls the head and mouth. It looks like a bicycle brake on a swivel at the end of a thin rod inside the costume. Squeezing it opens the mouth, turning or twisting it moves big bird's head. Big bird's feet are wide. You're supposed to walk with your toes pointed outwards so you don't trip. It's a lot to think about when you've never been big bird before. I got caught up in how crazy it was to suddenly become big bird. I especially liked opening and closing the mouth and moving the head around. It probably looked like big bird wanted to eat someone. Maybe I should have focused more on doing basic big bird things. Within ten minutes of getting the costume on I accidentally kicked a toddler in the chest. I just didn't see him."

4. "The cable won and sliced off the wing to the seagull."

"I worked at a local theme park in my late teens, and we had a Sky Coaster type thing, which is basically a large 180 foot tall arch type structure with two cables hanging from the sides at the top, and from 1-3 people in a sleeping bag type thing. You get raised up to the top pull the release cord, free fall for like 80 feet, then swing back and forth for a bit. It was a blast and a huge attraction.

One day this couple went up and left their 5 year old daughter on the ground to watch. They got to the top and released, after the free fall they started to swing back up, and a seagull decided to fly towards the cable. The cable won and sliced off the wing to the seagull.

Blood rained down on the poor little girl waiting on the ground and the seagull spiraled and landed in the bushes a few feet from her. For some reason she started screaming and the people nearby started to panic. It was an interesting 20 minutes." - JustinitsuJ

5. "He's acting weird and erratic, and is actually climbing on the rollercoaster's track, and is taking off his clothes."

"Some (mutter mutter) years ago, I was working my summer vacation at an amusement park, running a rollercoaster. I got to sit and push buttons, give the safety instructions, etc.

So, we get the train full of people, I get the all clear, hit the button to start the train up the hill, when I see something out of my periphery. A guy has somehow climbed the gigantic wall surrounding the ride, and has dropped down next to the track, where I am about to send a metal train full of people at 40 mph. I slam on the emergency stop button, which shuts down everything on the ride, and grab the phone for security.

My coworkers come up to see what's happening, and I point to the guy down in the ride zone. He's acting weird and erratic, and is actually climbing on the rollercoaster's track, and is taking off his clothes. Security tells us not to approach him, in case he's dangerous, and to move the people in line away. Meanwhile, I head up the stairs to talk to the people who are stuck in the ride. The stairs were open, metal things, extra narrow, steep, and at this point, damp. In the best of times, I hated climbing them.

I get up and most of the people are calm, except for one woman who is freaking out. She's panicking that the ride is malfunctioning, and that she wants off. Now, I understand panic attacks and how you're completely slave to them. So, I'm calmly telling everyone that I was the person who hit the emergency stop, why I did it, etc. From their viewpoint, they literally could see the guy climbing up the track, security chasing after him, etc. I've called for a manager to let this lady off because I'm not able to do it.

So, the manager finally arrives, lets this woman off with dire warnings about how dangerous the steps can be. By this point, the police are arriving, there's all sorts of stuff going on in the sights of the patrons as they are trying to arrest this guy.

And then, a guy on the ride announces he wants off too. So, the manager lets him off. He climbs over another guest, faces the train, and calmly announces that this entire thing--the half naked man, security, the police-- all of it was just a cover up for the fact that the ride had malfunctioned and that they were all going to die.

And I'll be damned if they didn't believe him. We evacuated that ride, and two people slipped walking down those stairs. I had to fill out massive paperwork to keep people from suing, thankfully we were able to call a cop over to witness. After police left, the ride was started back up, with no issues." - FinelineLD

6. "One of the rollercoasters got stuck and some lady decided that it was BJ time"

7. A guy jumped from the parachute ride and committed suicide.

"My dad worked at Knotts Berry Farm as head of Maintenance in Southern California for like 15 years in the 80's and 90's and I grew up going in the behind the scenes at the park, and riding the rides before it opened. I have a couple stories. Fun fact my mom and dad met at the chicken dinner restaurant :)

8. Time to "adjust the chemical levels."

"I worked at a water park. Anytime the wave pool or a slide got shut down to "adjust chemical levels" or whatever, it was most likely because a kid took a shit in it. Happens all the time." - cmjohnson7799

"I worked at Disney World for 4 months. 3 people died while I was there - all employees. On paper? Nobody died. Disney is sneaky." - omglia

10. "The males have been known to push trainers up against the pool walls and try to mate with them."

"I retired from Orlando's Seaworld as an artist. I was chatting one morning with a trainer and he told me that during mating season it's very dangerous to get in the pools with the dolphins. The males have been known to push trainers up against the pool walls and try to mate with them. Dolphins are nothing but massive muscle and are extremely strong. They are aggressive during mating season too." - purple_sage2