Thank you, Internet: For real hoverboards and 'Dachshund's Creek'

October 24, 2014 at 12:25 PM
comment
The weekend is so close you can almost taste it, right? Or at least taste your first happy hour drink! Here are some links to help you slog through the last few hours of your work week:

1. You guys, a hoverboard is no longer one of the things to long for from Back to the Future Part II. Soon, you'll be able to buy one and spend the afternoon at the hover park thanks to a California couple that has made hovering technology a reality. For a $449 Kickstarter donation, you could have a hoverboard under your feet by August 2015. The Hendo Hoverboard is decidedly less '80s-looking than the BTTF version, but it looks to be a damn fun ride. Take a look at the Kickstarter video below:

2. Here's a recipe for pumpkin Oreo stuffed pumpkin cookies. It's like all of the pumpkin spice in once place! Pumpkin Oreos, pumkpin puree  and pumpkin spice chips. Our suggestion? Throw some semi-sweet chocolate chips in there too, cause everything's better with chocolate, right? 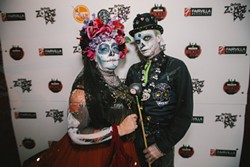 139 photos of the undead at Orlando Zombie Ball

3. There were some elaborate costumes at Orlando Zombie Ball on Wednesday at Venue 578.  After going through a scare zone created by Legends: A Haunting at Old Town and before heading into the party, we had everyone stop in our photo booth. This gallery holds our favorite shots.

4. Last month, Dawson's Creek disappeared from Netflix, but YouTube user mikeimmerman created something to the fill void left by the melodramatic teen drama. And we gotta be honest, he improved upon the original material. As evidenced by all the adorableness at last weekend's Weinerfest (check out our gallery here), dachshunds are friggin' cute. Put some wigs on 'em and let them stand in for Katie Holmes and James Van Der Beek? Perfection.

5. It's relatively common knowledge that The Amityville Horror is based on a true story, but did you know that Child's Play was, too? The video above contains some facts about those and eight other horror movies based on true stories.