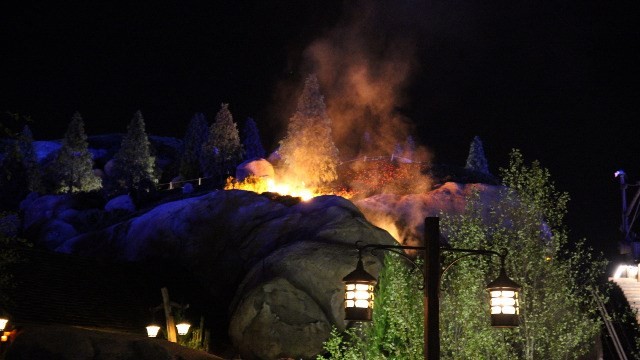 Image via My Fox Orlando

Saturday night, the Seven Dwarfs Mine Train at Disney's Magic Kingdom caught fire. Guests and employees were immediately evacuated from the ride and, luckily, no one was hurt. The fire did not happen on the actual ride itself, but in the decorative area just outside the ride. Firemen doused the fire quickly. In total, the ride was closed for just over two hours, reopening around midnight that night.

The ride operated as normal on Sunday. Reedy Creek Fire Department says the fire was caused by falling embers from Disney's nightly fireworks show. No word yet if Disney plans to make any changes to the show to eliminate the chance of another incident. It was windy as hell on Saturday, though, so that may explain the wayward ember.

This isn't the first fire the Magic Kingdom has experienced, either, nor was it the first time the Wishes fireworks show was the cause. Earlier this year, the show caused a fire on the roof of Under the Sea: Journey of the Little Mermaid, which was extinguished by the attraction's sprinkler system. Twice in 2011, fires broke out in the park, in January in Enchanted Tiki Room and October on the Astro Orbiter. Thankfully, no one was harmed in any of these incidents.

Disney's monorail has also suffered its share of fires in the past. On June 26, 1985, more than 200 monorail passengers were evacuated and seven were hospitalized after a fire overtook the rear car of the six-car Mark IV Silver monorail train. Then, in 1996, an electrical fire caused the evacuation of a monorail car, sending two people to the hospital for smoke inhalation.