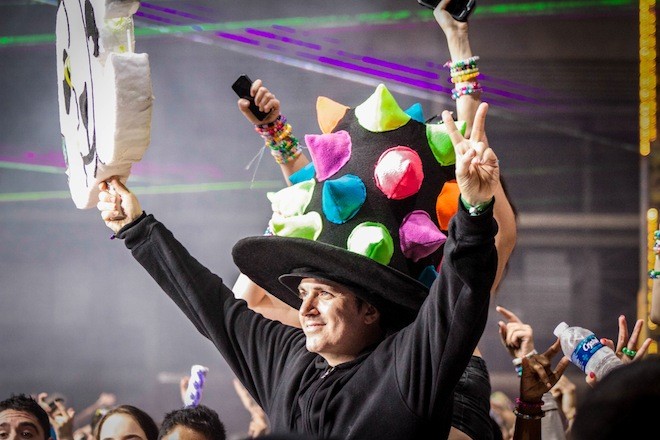 Many concert tours hype “an experience” over simply highlighting the music, but Electric Daisy Carnival – in its decadent, sprawling ways – continually delivers where sad stage gimmicks of lesser tours fall flat. We wanted to know what to expect from this year's EDC, so we talked to EDC founder Pasquale Rotella about the big, lingering questions - what's different (going cashless with "daisy dollars"), what's new (a new stage dubbed the Neon Garden debuts in Orlando) and what's the same (Rotella is NOT banning Kandi). The carnival comes to town this weekend, Nov. 7-8 at Tinker Field, starting at 1 p.m.

Orlando Weekly: There was concern that Citrus Bowl construction might effect the event, has the layout changed this year because of it, and when can we expect the festival map and lineup schedule?

Rotella: The layout is a little different, not much though really, we’re planning on having the map out Wednesday and the lineup schedule on Tuesday.

Insomniac broke records this year with Kinetic Cathedral, the largest stage ever assembled in North America, and it’s coming to Orlando! Will we see other pieces we haven’t seen yet, maybe the Megastructure?

No Megastructure, but you will see things that you’ve never seen in Orlando before, and things that we’ve never brought anywhere else in the states before either. The Neon Garden is completely new and was built just for EDC Orlando this year.

EDC Orlando has gone cashless, electronic (RFID) wristbands that attendees will load with “Daisy Dollars” have begun shipping. How is it working out, and is there anything we should know that isn’t covered in the blog on Insomniac's website?

I’m excited about it, but I’m also worried about people not getting it at first, so that might be a hurdle only because they may not be familiar with the technology. I believe it’s something that can make people’s experience better, so that’s why we’re trying it. If it turns out that it doesn’t make things better, we can always go back. Yeah, check out the blog, and you can ask questions on the hashtag #EDCRFID.

Speaking of the lineup, who would be a dark horse pick that people would be surprised by and might come away from their set with a new favorite artist?

I don’t think enough people have heard Arty on that side of the United States, and his DJ sets are amazing. I definitely want people to check him out.

You recently defended Kandi and commented on remarks dissing EDM and EDC from Tom Petty, among others. Do you feel a need to comment on things because of your position in the scene, and when do you choose to be vocal or silent on certain issues?

It’s not really a decision; it just comes across my social media, and I’m really passionate about all this, so I just try to speak. I don’t feel like I’m the voice, I’m not trying to preach or anything, but I do have an opinion. I respond because I love this thing, and I have an opinion even though it may not always be something people agree with. The Kandi thing is ridiculous. It’s part of the culture. That’s where all this started. There were enough places in the world where you could go and feel uncomfortable, and the underground started because there was a place where you could be yourself. It was the melting pot of all different styles and different swaggers, it didn’t matter what you did or where you came from, and that was one of the amazing things about it, so for people to start banning clothes is ridiculous.

This guy is decked out in the controversial kandi beaded jewelry some music festivals have chosen to ban. See more EDC photos from last year!

What would you like to see more of in today’s dance scene? Less of?

More people dancing! More people getting down and letting loose. I’d like to see people be less serious, and I’d like people to look out for one another and take care of themselves better.

I’d like to see less people who are out if it. You know, go to events and be more aware, drink more water and not get too drunk, have a good time but understand their surroundings more, and not be out of it, so they can remember.

Electronic music is still riding a huge wave of popularity, but it’s new to some people and thousands will experience EDC and the electronic community for the first time here in Orlando. What would you tell them to make sure their first time is good, and what they should do to ensure everyone around them has a good time as well?

Dress up, get creative with your costumes, be open to meeting new people, look out for one another, leave your worries at the door, and dance like no no one’s watching.

Building on that, what responsibilities would they have moving forward as they discover electronic music and our community?

Be open to meeting new people, try to forget about your every day responsibilities. Escaping is what can make the scene even more memorable and allow you to connect with others and connect with yourself, which is really important.