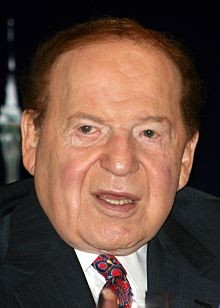 Everybody knows who's running the Yes on 2 campaign in Florida – that would be Orlando attorney John Morgan, whose commercials about how his paralyzed brother has helped inspire his enthusiasm for legalizing medical marijuana have been ubiquitous during this election cycle. But the man who's funding much of the No on 2 campaign for Drug Free Florida is Sheldon Adelson, a businessman, philanthropist and Las Vegas casino owner. According to the Washington Post, he's the country's 12th richest person, and he has put up about 85 percent of the $5.8 million raised by Drug Free Florida. Apparently Adelson's wife, Miriam, is a physician specializing in drug-abuse treatment. She runs the Adelson Clinic in Nevada and Israel, both of which specialize in treating people with opiate addiction.

In 2012, Adelson, a big donor to the Republican party, also helped bankroll the floundering campaign of presidential candidate Mitt Romney. This story by the Las Vegas Sun paints a pretty fascinating picture of the man and his motivations.  He told Forbes in 2012: "I'm against very wealthy ­people attempting to or influencing elections. But as long as it's doable I'm going to do it."

And this year, he's doing it in Florida.