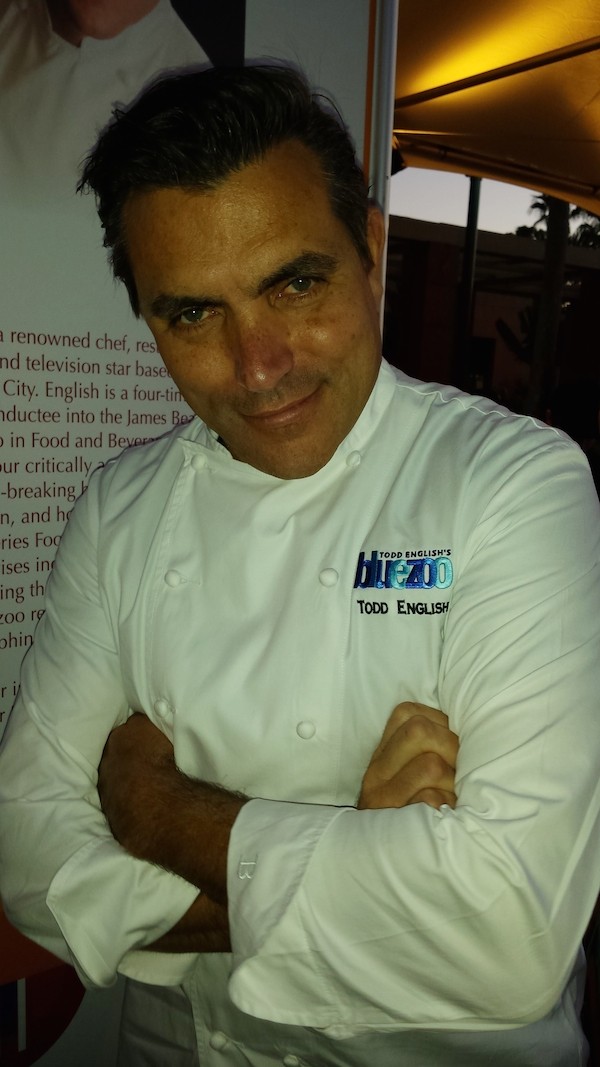 Todd English was every bit the charismatic chef when we interviewed him three years ago, but after some recent incidents that garnered him a bit of negative press, the scandal-plagued 54-year-old appeared somewhat guarded sitting beside his handler inside bluezoo’s gleaming private dining room. We sat down with the always personable celeb chef while he was in town attending the Food & Wine Classic at Disney’s Swan & Dolphin Hotel, and talked Top Chef, Thomas Jefferson, dining trends and, naturally, sex.

OW: It's been three years since we last spoke to you. What's the biggest change that's occurred in your life?

TE: My children are grown (laughs). Now they tell me what to do! My oldest works with me and it’s been an interesting dynamic. It’s been great, and I love them as young adults, but that’s been a big change. In terms of the chef world, the impact of allergies, of diabetes – all those social, biological and hereditary issues – are very big. We can’t cook a single night without someone with some sort of allergy passing through our restaurant. So you have to ask yourself, what’s going on in our world that we’re a nation full of allergies? I have theories on it, all of it factual, but I won’t get into that. We’re going to become, and I don’t mean this arrogantly, but as a person in the food industry who cares, and who’s passionate about us eating in a healthier way – we’re going to have to become knowledgeable and become “doctors” of cuisine. As a chef, I firmly believe you are what you eat and, in my own life, I’m looking at a healthier regimen in my diet, and a healthier regimen in my lifestyle. The latest thing I’m into is coffee with two teaspoons of coconut oil in the morning. It actually helps you lose weight and increases metabolism.

OW: The dining scene has really changed in Orlando since we last spoke. Why do you think Orlando has become such a great foodie city?

TE: All walks of life come here. You've got a great international crowd, South Americans, every demographic, plus there’s a huge convention business. That’s all going to drive the food scene here and it shows.

OW: Who's your pick to win Top Chef this year?

TE: (Pauses) I forgot all their names.

OW: Describe the person, we’ll figure out their name.

OW: How do you cope with being in the public eye, and what do you do to escape?

TE: I keep a close circle of friends around me, I hang out with my kids, and I cook a lot at home. That’s pretty much it.

TE: I think there’s a reason that sales at McDonald’s are down. There’s a generation coming up that will not eat at McDonald’s, like my kids and all their friends. But it’s not like they’re not going to eat pizza, they’re just going to eat the best pizza they can find. Pizza that has organic flour, organic tomatoes, house-made cheese. They know the difference and they’ll go for quality and they’ll spend a little bit more to get it. I think you’re also going to start seeing a lot more ethnic flavors, specifically Asian. By that I mean more soy, more ginger, more sesame flavors.

OW: Is a great cacio e pepe still is as good as sex?

OW: If there's one person you really want to cook a meal for, who would that be and why?

TE: I love history, so it would have to be someone like Thomas Jefferson, or Caesar. I’m fascinated by history and the way they lived. Thomas Jefferson had an incredible wine collection from France and he was a real ambassador to American cuisine.

OW: What's the one restaurant you're dying to visit, but haven't yet had the chance?

TE: (Pauses) I’d love to see what they’re doing at Noma in Denmark, but I’m more interested in where the original In-N-Out burger was made. That’s more fascinating to me.