Dr. Phillips Center for the Performing Arts opens its doors 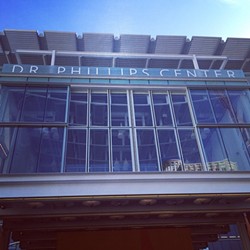 "It's a great day for Orlando!" speaker after speaker from the podium boomed at the audience of about 500 settled into white folding chairs on the lawn of the Dr. Phillips Center for the Performing Arts, which opened its doors to the public on Thursday, Nov. 6, during a ribbon-cutting ceremony. The ribbon-cutting, it should be noted, was strictly metaphorical – there was no blue ribbon or giant ceremonial scissors. There was, however, a dramatic unveiling as an orange curtain was dropped revealing the center's entrance and confetti cannons blasted star-shaped bits of paper into the air.

"No it's not," I heard a grumpy voice mumble behind me. I turned to see who had blasphemed the center, and awkwardly locked eyes for a moment with a teenager who looked like she'd been dragged to the opening against her will.

Still, for most in attendance, it was a great day – a chance to see the performing arts center that's been seven years in the making and has been the object of much angst and hand-wringing and even controversy as it made its way from underfunded, overpriced, pie-in-the-sky idea to the newest crown jewel of Orlando (our last crown jewel was the Amway Center, which was completed in 2010). The performing arts center, the crowd was reminded multiple times by Dr. Phillips Center for the Performing Arts chairman Jim Pugh and former Orange County Mayor Rich Crotty, is state of the art – only the 37th of its kind.

After multiple speeches (Orlando Mayor Buddy Dyer said he was having the most fun ever; Orange County Mayor Teresa Jacobs said she is the happiest county mayor in the country), the public was ushered inside for tours of the space. Some fun facts we learned on our tour: 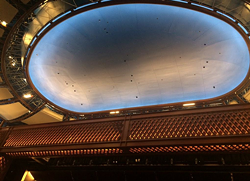 The view from the balcony of the DeVos Family Room.

You can get a taste of the Dr. Phillips Performing Arts Center for yourself at one if its upcoming grand-opening events.

For more photos from today's opening, check out this gallery by Grace Howard. In next week's issue, check out our Arts & Culture section, where Seth Kubersky will talk about the performing arts center in his Live Active Cultures column and Yulia Tikhonova will discuss McGrath's work in more detail.