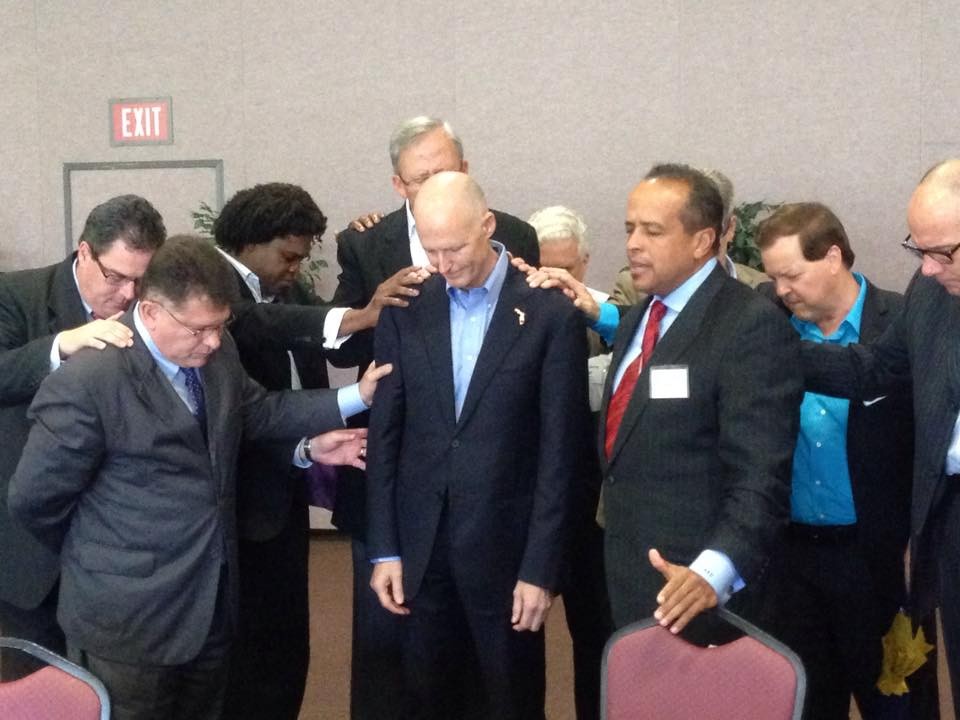 John Stemberger and friends pray on Rick Scott, via Facebook.

Usually when we get interesting stories from the State House from the News Service of Florida, to which we subscribe for year-round updates from Tallahassee, we post them to our site – but before we did that with the service's recent story on the future of LGBT bills in Tallahassee following the 2014 election, we had to point out a stunningly arrogant and thoughtless comment made by conservative Florida Family Policy Council president and anti-gay zealot John Stemberger, known primarily for his staunch opposition to any bill, ordinance or measure that advocates for equality for LGBT people.

In total, Republicans flipped six seats in the House on Election Day, giving them a supermajority. As everybody knows by now, state Rep. Joe Saunders, an Orlando Democrat and one of just two openly gay members of the state Legislature, was one of the representatives who was ousted by a Republican challenger and won't be be returning to Tallahassee in January. Fortunately, there are still some members of the House hoping to continue his work fighting for equality for all in Florida, including Republican Rep. Holly Raschein of Key Largo, who told the News Service that she would pick up the torch for the Florida Competitive Workforce Act, which would ban discrimination in the workplace based on sexual orientation.

"It's my hope that my colleagues will see it as a bipartisan issue," she told the News Service. "I never look at equality as a partisan issue, personally. Being a Republican is about freedom and liberty. This is quite a conservative principle, if you ask me."

It's a shame some of her fellow Republicans don't agree, and Stemberger is clearly planning to do his part to keep them in the Dark Ages. He called the bill "dead on arrival" and indicated that there's no way Republicans, now that they hold the power, would let "odious" bills like this one pass on their watch.

"There's no way, in this climate, they're going to get any oxygen at all now," Stemberger told the News Service.

No oxygen. None. At all. According to John Stemberger, who is a registered lobbyist for 2014, so we know he'll be doing his best to make sure that is true.

For more information on who Stemberger is and what he stands for, you can watch the video below.

You can read the full story from the News Service of Florida below:

THE NEWS SERVICE OF FLORIDA

The 2014 election wasn't a good one for Florida's lesbian, gay, bisexual and transgender community.

LGBT organizations supported Democrats Charlie Crist for governor and George Sheldon for attorney general, but both lost. So did state Rep. Joe Saunders, D-Orlando, one of the first two openly gay members of the Legislature, elected in 2012.

But despite those losses, some supporters are hoping for movement on a bill, the Florida Competitive Workforce Act, that would ban discrimination in the workplace based on sexual orientation. It was Saunders' bill, but now it will be sponsored by a Republican lawmaker, Rep. Holly Raschein of Key Largo.

"It's my hope that my colleagues will see it as a bipartisan issue," Raschien told The News Service of Florida on Monday. "I never look at equality as a partisan issue, personally. Being a Republican is about freedom and liberty. This is quite a conservative principle, if you ask me."

"There's no way, in this climate, they're going to get any oxygen at all now," he said.

The Florida House is even more Republican after this year's elections, which gave the GOP a veto-proof majority in the chamber. Gov. Rick Scott and Attorney General Pam Bondi, who support "traditional marriage" between a man and a woman, were both re-elected.

But LGBT organizers said even so, this election wasn't as searing as 2008, when Floridians passed the "Florida Marriage Protection Act" --- the ban on same-sex marriage spearheaded by Stemberger.

"I cried, pretty much for three days straight," said activist Susan Gage. "It was enormously painful to have your life, your relationship put onto the ballot and have people cast a vote on whether you get to stay in or off the island."

Andy Janecek, president of the Capital City Gay, Lesbian, Bisexual, Transgender and Allies Democratic Caucus, said groups like his had redoubled their efforts after the amendment passed.

"Our community really rallied after that point," he said. "We elected openly LGBT representatives to state government. We elected local county commissioners, city commissioners. We really worked to advance folks who were going to advance equality and not keep it on the backburner."

And in 2012, Saunders and Rep. David Richardson, D-Miami Beach, were the first openly gay Floridians elected to the Florida Legislature.

"It was, 'At long last somebody who really represents me is going to be in the chamber,'" Gage said. "'And it's going to be an awful lot more difficult for these people to say the ugly things that I used to hear them say about gay people --- on the floor.'"

Saunders said Monday that Tallahassee traditionally had been "a hostile environment" for LGBT people, but it is less so now. He pointed to the fact that with a Republican governor and GOP majorities in both chambers, his workplace anti-discrimination bill drew 11 Republican co-sponsors.

"And while I do think the path to marriage equality in the state and comprehensive non-discrimination protections would be quicker in a Tallahassee that has more Democratic energy, I think we also have to point out that some of the largest contributors to Gov. Scott's campaign were the same people who are now leading this coalition calling for comprehensive non-discrimination protections in the LGBT community," Saunders said.

Last week, the Florida Businesses for a Competitive Workforce Coalition, which supports the anti-discrimination legislation, announced the hiring of a bipartisan team of professionals to oversee the initiative for the 2015 legislative session. They include Ashley Walker of Mercury Florida, Towson Fraser of Southern Strategy Group, Ann Herberger of The Woods Herberger Group and Christina Johnson of On 3 Public Relations.

"I don't think it's a social issue," Raschien said. "We're the jobs party. This is about people's jobs. We want to recruit the best and the brightest to Florida, and I think this sends a strong message to that community."

Stemberger called the workplace discrimination bill "particularly odious." He raised the possibility that the legislation could force some business owners to violate their religious beliefs.

"When a bed-and-breakfast owner, when a baker, when a photographer or videographer refuses to photograph a wedding --- I mean, where's the greater injustice? To ask the gay-identified person to go in the phone book and find one of 1,500 other vendors? Or to ask one person to violate their conscience and to do something that they believe to be immoral, improper or violates their faith?"

Gage and Janacek say they aren't going away.

"I think it's going to be easier for (lawmakers) to contemplate and wrap their heads around actually hearing bills and bringing them to a vote,´ Gage said. "Whether or not they pass in this legislature is another question, but ... it's baby steps. You have to keep moving forward."