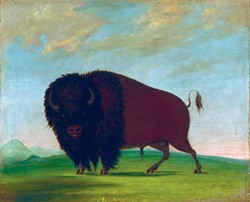 Today it was announced that Frank Holt, the longtime director of the Mennello Museum of American Art, will retire at the end of January 2015. Mr. Holt, who came to the museum as its first director from a position as public art manager with the city of Orlando, has overseen many changes since the Mennello first opened its doors. Holt was instrumental in widening the museum's scope from simply folk art to all American art, and in establishing the Mennello's affiliation with the Smithsonian Institution. Virginia Mecklenberg, chief curator of the Smithsonian American Art Museum, has called Holt a "visual genius."

The exhibition currently on display, George Catlin’s American Buffalo, is on loan from the Smithsonian American Art Museum through Jan. 4, 2015, and is paired with an exhibition curated by Holt, A Sense of Place: The Taos Society of Artists.

The city of Orlando, which owns and operates the Mennello Museum of American Art, is currently interviewing candidates for a new executive director. See the full press release below. 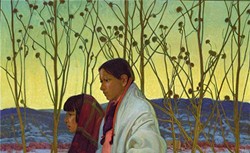 "Homeward Bound," by E. Martin Hennings, from the exhibition "A Sense of Place: The Taos Society of Artists"

The Mennello Museum of American Art has only known one director, Frank Holt, and as the museum’s 15th Anniversary year comes to a close, Holt has announced that he will retire at the end of January 2015. His departure will mark the end of an era of visual arts excellence guided by his distinctive curatorial style. Interviews for a replacement are being conducted by the City of Orlando, which owns and operates the museum that opened its doors in November 1998 in the former residence of Howard Phillips, son of Dr. P. Phillips.

Holt has been praised as a “visual genius,” by Virginia Mecklenburg, chief curator at the Smithsonian American Art Museum. One of the major progressions for the Mennello Museum was the establishment of its Smithsonian Affiliation status; currently, the museum is exhibiting George Catlin’s American Buffalo, on loan from the Smithsonian American Art Museum, through January 4, 2015. The Catlin exhibit is paired with an original exhibition curated by Holt, Sense of Place: The Taos Society of Artists, also continuing through January 4, 2015. The two historical exhibits represent the third and final installment in the yearlong “Art of the American West” series, celebrating the museum’s 15th anniversary. The American West theme satisfied a career-long wish by Holt, and his passion for art from this region has resulted in a finale with flourish. Two more public talks on The Taos Society of Artists will be led by director Holt at a Coffee With the Director at 9 a.m. Wednesday, November 12, and at an Evening With the Director at 7 p.m. Tuesday, December 2.

In 2007, Holt worked with the Smithsonian American Art Museum on the creation of the exhibit Earl Cunningham’s America, which opened at that museum in Washington, D.C., before traveling to other museums. The Cunningham exhibition carries the distinction of being the first solo show at the Smithsonian devoted to a self-taught artist.

Prior to becoming the executive director at the Mennello Museum, Holt began his service for the City of Orlando in 1990 as the Public Art Manager. In this position, he managed all aspects of the city’s public art program, making key purchases that contributed to the ranking of the City of Orlando Permanent Collection as the largest public art collection in the state.

There’s an esteemed list of exhibitions that Holt curated, including Florida Craftsmen: Art vs. Craft (1993), Skirting the Issue: Women Artists in Florida (1993-94); The Passionate Eye: Florida Self-Taught (1994); The Paintings of George Bellows (2007) and The Worlds of John Sloan: Gloucester and Santa Fe (2008).

Holt received his B.F.A. in Sculpture and his M.A. in Art History at Virginia Commonwealth University, Richmond. He has taught art history at Valencia Community College, Rollins College and the University of Central Florida. He has served on many state-wide panels and as a juror on numerous exhibits and festivals. He served as the Fellowships Exhibit Committee Chair for the Florida Art Museum Directors from 1996-2003 and on the board of the Maitland Art Center. He is a member of the Florida Art Museum Directors Association and the Florida Association of Museums.

About The Mennello Museum of American Art

The Mennello Museum of American Art endeavors to preserve, exhibit and interpret the Museum’s outstanding permanent collection of paintings by Earl Cunningham. The Museum also seeks to enrich the public through special exhibitions, publications and programs that celebrate other outstanding traditional and contemporary American artists.

The Mennello Museum of American Art is owned and operated by the City of Orlando.