Orlando is one of the top cities for the LGBT community 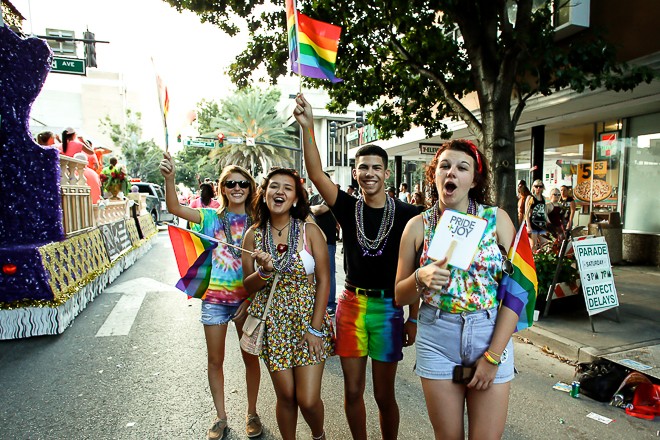 TONS of photos from the Come Out With Pride 2014 Parade At a press conference today, Orlando Mayor Buddy Dyer announced that the City of Orlando received a score of 100 on the Municipal Equality Index (MEI), making Orlando one of the top cities for the lesbian, gay, bisexual and transgender (LGBT) community. The MEI, conducted by the Human Rights Campaign, evaluated 353 cities on their laws, policies and support for the LGBT community. Orlando is one of the few cities to achieve a perfect score, despite being in a state where marriage equality is still elusive. You can read the entire report here. Here's the full press release from City of Orlando:

ORLANDO, Fla., (November 12, 2014) – Orlando Mayor Buddy Dyer and the City of Orlando are proud to announce the City has obtained the highest score of 100 on the 2014 Municipal Equality Index (MEI), a nationwide evaluation of 353 cities on how inclusive the city’s laws and policies are for lesbian, gay, bisexual and transgender (LGBT) community. Orlando is one of the few major cities in the country to obtain the top score of the MEI.

“This perfect score demonstrates the progress our community has made and validates our commitment to have an inclusive government that promotes diversity throughout the establishment of policies and procedures that benefit all sectors of society, including the LGBT community,” said Mayor Buddy Dyer. “I am proud of this accomplishment as we continue attracting talented people from different backgrounds to strengthen our economy."

The MEI is conducted by the Equality Federation Institute and Human Rights Campaign Foundation and examines 353 cities from every state including 50 state capitals, the 150 largest cities in the United States, the three largest cities or municipalities in each state, the city home to the state’s largest public university and 75 cities and municipalities that have high percentage of populations of same-sex couples. The MEI team evaluates cities on the following criteria: Non-Discrimination Laws, Relationship Recognition, Municipality as Employer, Services and Programs and Relationship with LGBT Community.

"I am delighted that the City of Orlando is so committed to equality. This year’s index is a reflection of that commitment,” said District 4 Commissioner Patty Sheehan.

Under the Mayor’s leadership, the City of Orlando focused its efforts on supporting our local LGBT community, including, but not limited, to:

Funds for the homeless & HIV/AIDS: Through our City of Orlando Housing Department, Orlando provides funding through its Housing Opportunities for People with Aids grants for both homeless and elderly LGBT people as well as specific supportive programs for people living with HIV/AIDS.