TIL: Black Bean Deli breakfast is pretty much perfect 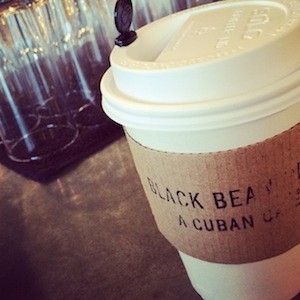 We finally made it into the Orlando location of Black Bean Deli this morning for that breakfast service we told you about a couple of weeks ago. And just as we expected, it was pretty much perfect – simple, tasteful (in every sense) and a very welcome new way to start the day.

As you can see from the menu (below), it's a fairly small selection of breakfast sandwiches and pastries – this is more about being able to get a totally decent café con leche in Mills 50 from 7 a.m. – but it covers the basic needs with both sweet and savory items. I can attest that the media mañana sandwich is a killer: rich enough that it's better than anything you're going to make yourself before work, but small enough that you aren't going to die of bloatedness at your desk mid-morning.

The recent expansion of the BBD empire (this second location, the Amway concession, and now breakfast) has been admirable – slow and steady, no overreaching. Kudos to Andres Corton and crew. Now if we could just get that French onion empanada from La Empanada (the food truck that is yet another venture of Corton's, with Gabi Arnold and Janelle Luce) at Black Bean Deli on a regular basis ...