Cameo theater's cool old sign is about to make a comeback 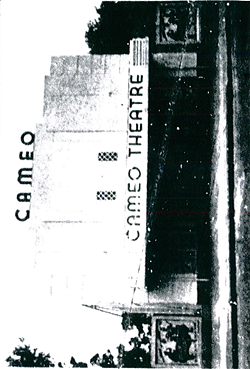 An old photo of the Cameo – apparently the only one that could be found – showing its original signage. Photo via City of Orlando

At yesterday's Orlando City Council meeting, commissioners agreed to approve an application to re-create the cool old sign that used to adorn the Cameo theater building on East Colonial Drive.

According to an application to the city's Small Business Facade Program, which helps defray the cost of facade improvements for local business owners, building owner Jorge Boone wants to put a replica of the original Cameo sign on top of the building "to re-establish the identity of the building and bring a sense of history and place to the area." The project is expected to cost around $29,000 and the city agreed to Boone's request for $14,000 through the facade program. The new 18-foot-long sign will use the same retro font as the original, and it will be lit with more than 300 LED bulbs.

According to Bungalower.com, the Cameo was built in 1939 as a movie theater, but later became offices for IBM in the 1950s. The Cinema Treasures website says the theater was only open for about five years in its original incarnation.

Over the years, it has served as the home to the Greater Orlando Actors Theater, it has hosted an eclectic variety live music shows and an occasional venue for various art shows. Today it's home to Snap! Orlando, which has turned it into Snap! Space, a stellar art gallery. "We are thrilled for [the sign] to be brought back to life and [can't wait] to see the Cameo in lights again," said Snap! owners Patrick and Holly Kahn today.