Letters to a Satanist: Are you upset that Orange County public schools closed its open forum for religious literature distribution? 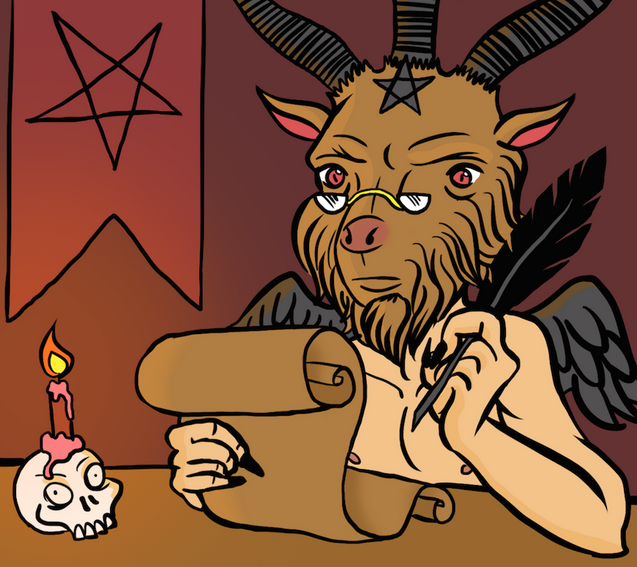 Illustration by Lee DeVito Recently, Metro Times, our sister paper in Detroit, unveiled a new column called Letters to Satan. Readers are invited to submit questions about Satanism to be answered by Doug Mesner, a spokesman for the Satanic Temple. Since the Satanic Temple has been so active in Florida in the past couple of years (they rallied for Gov. Rick Scott last year, and more recently, they’ve been saying that they’ll be handing out literature at Orange County Public Schools), we figured we’d run some of the letters, too. Here’s the latest installment. Let us know what you think in the comments below.

Are you upset that Orange County public schools closed its open forum for religious literature distribution in response to The Satanic Temple’s request to participate, or are you happy that Bibles will no longer be handed out in schools?

In a press release dated September 12, 2014, The Satanic Temple announced that it would seek to disseminate Satanic literature -- in the form of an activity book -- to students in the Orange County school district (FL), where the acting board had already allowed for the “passive distribution” of Evangelical materials. As a public institution, the schools are not allowed to engage in viewpoint discrimination, privileging one religious view to the exclusion of others. While The Satanic Temple feels that religious propaganda and proselyting have no place in public schools, it is far better that multiple religions be represented in a so-called “open forum” than that a single viewpoint be allowed to dominate the discourse.

Last week, in light of national attention brought to the issue, the Orange County school board met to rethink their open forum policy. The board's chairman, Bill Sublette, stated, "This really has, frankly, gotten out of hand. I think we've seen a group or groups take advantage of the open forum we've had.'' Sublette also had the long-overdue epiphany that “Religious instruction really belongs in the home, not in the schools.” The board decided to cancel the forum originally scheduled for January, and indicated that they will soon vote to be rid of the open forum policy altogether.

And with this, it seems we’ve exposed that the open forum was never truly open at all, and the passive distribution policy was never intended for the “advantage of” non-Christian materials. We would certainly have been happy to follow-through with our participation in the open forum, but ultimately our goal was to avert a worst-case scenario: a forum in which only Evangelical materials are represented, providing the appearance of unique deference toward one religious view. Legally, the board had two options: go forward with the open forum, including our Satanic Activity Book, or shut the forum down entirely. To The Satanic Temple, it was a win-win situation.