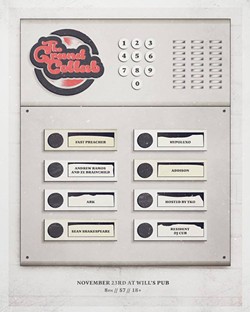 It’s always a good thing whenever a new showcase concept pops up. But Grand Collab is one for which I’m cheering especially hard because I believe so much in its premise. A joint between Chris “DJ Cub” Mendez and Sandra Quinlan, this series hopeful shoots for diversity through multi-genre shows. It’s the exact precept I’ve always used for shows I curate because I think you build a deeper, more aware and more broadly supportive scene when you open the doors between the rooms in this house of ours. Things begin to circulate more and fresh air starts moving through. On my own, I’ve had only limited success with propagating this ideal, as if the very concept just cramped everyone’s damn brains or something. But the ones who get it really seemed quenched by the effort, so I really hope Grand Collab can further this exciting and nourishing paradigm.

The debut (Nov. 23, Will's Pub) was anchored by some certified forces like Fast Preacher and spanned hip-hop, indie rock, electronic, soul and rock & roll. But I see as the bigger promise of Grand Collab as a style-spanning gateway to the next class of homegrown talent, something I’m forever interested in. Like an open-genre Dope Operatic, Grand Collab featured a host MC (TKO) and DJ (Cub) to keep the night seamless and the action non-stop.

Both TKO and Sean Shakespeare dropped solid conscious-rap science. Orlando’s Ark proved that “solo” plus “electronic” need not necessarily equal “suck” by delivering a lovely set that struck a balance of synthetic and human that felt natural.

In her band Deaf 2 the Industry, guitarist-singer Addison isn’t the primary focus of attention. It turns out, however, that she’s got plenty of gravity on her own as a singer of confidence and power. With just an electric guitar, she merged rock and soul into a thing of muscled, resonant vulnerability.

But the night’s lightning-bolt discovery was West Palm Beach’s Hypoluxo. How in hell have I not heard of these kids before? A band this good and formed usually triggers a vibration of some range and amplitude by now. Well, let’s go ahead and get them on the books already. With tall, stately indie rock cast in dreamy gaze textures, they sound like the National waking up one day with innocence restored and emancipated from the world’s weight. On the wings of a very clear and soaring vision, Hypoluxo is one of those bands that feel and sound like they could catch fire at any moment. What’s more, it looks like they’ve been hitting the pavement pretty hard in NYC so mark them now because you could be seeing their name again very soon.

So long as the bar is reasonably high, there is everything to like about the cross-pollination ethos of Grand Collab. Because I know firsthand how difficult natural tribal lines are to overcome, I’m rooting hard for this new entry into the scene. We would all be in a different, much better place if we fostered a rounded and enlightened local-music heterogeneity instead of the patchwork of cliques we often are.

Before the debut, DJ Cub told me that, if all goes well, Grand Collab will become a regular series in 2015. From what I saw, the turnout looked healthy and everything felt right. Apparently, all went well enough to get Grand Collab confirmed again at Will’s Pub on Dec. 28. So go see what I mean.