MAP: What's the most-hated college football program in the state of Florida?

Reddit user AaronRodgers16 recently conducted a poll to discover the most-hated football program in each state. Some of the results are unsurprising. States with big football rivals tend to harbor hate for that rival: Ohioans hate Michigan, Oklahomans aren't cheering one bit for the Texas Longhorns, etc.

Here's where it gets weird. Texans hate the Texas Longhorns, too. Michiganites aren't cheering on their Wolverines. And the same stands for Florida, where our most hated team is the Florida State Seminoles, despite landing a spot in the College Football Playoffs (the 'Noles face off against the Oregon Ducks in the Rose Bowl on New Year's Day.) We guess it kind of makes sense, though, since both of Florida State's big rivalries are in-state (Florida Gators and Miami Hurricanes).

This self-loathing phenomenon seems to be the same for quite a few states, particularly in the South.

And for comparison purposes, here's a map from Ticket City depicting the most popular college football team in each state. It may just explain all of the Seminole hate. 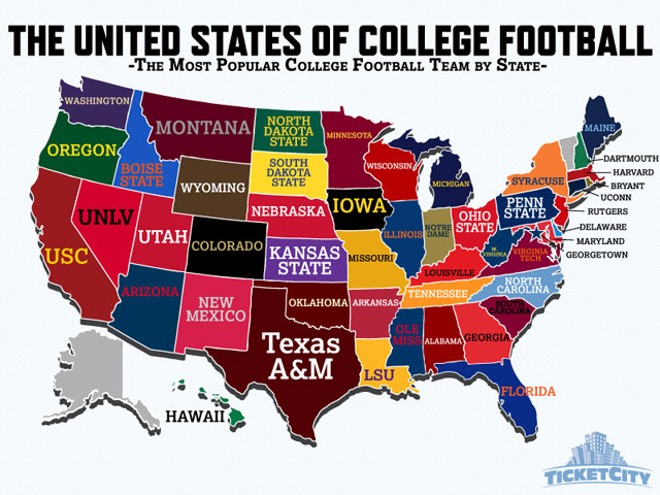