This Little Underground: Nikki Lane and Trampled by Turtles at HOB

As you may know from our 2014 highlights, the current album by Nikki Lane, All or Nothin’ (New West Records), made my personal Top 10 for this year. After spending weeks agonizing over my picks, dedicating them to words and then finally turning them in, of course I immediately proceed to second-guess my final cut. It happens every year. Such is the anxiety these superlatives lists inflict upon, you know, serious critics like us. Pretty sure it’s chief among First-World concerns.

But after seeing Lane perform in person (Dec. 14, House of Blues), any nagging doubt evaporated in a big ol’ poof cloud. She’s got sharp songs, a good band and a deep, projecting voice that fills even the rafters. It’s a thing of reach with long, elegant wingspan and a whip-cracking Loretta edge. Natural, effortless, gigantic, her singing is a bombshell of ballsy femininity.

This young woman here is the genuine article. But I also believe she’s a bright star just waiting to shoot. She’s indie enough to be interesting but not alienatingly so. In other words, anyone who’s into young country music needs to give her a serious spin.


Headlining was Minnesota’s Trampled by Turtles, a group that’s part of the mighty surge of young folk neo-traditionalists. Unlike some of their more eye-catching contemporaries, they rendered their crystalline blend of folk, bluegrass and country with skillful respect without trying to be too adorable or glam. Instead, with a sextet of crackerjack stringmen, they go for a big ensemble attack. At one point, they even had an additional classical string quartet from Orlando join them onstage for a bit to chilling orchestral results that raised hairs and brought down the house. It’s always nice to see the triumph of pure craft. 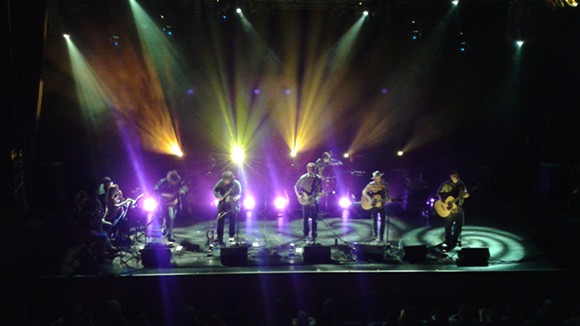