This Little Underground: The Black Keys at Amway Center

I’ve been asking how the Black Keys ever got so big ever since they began playing larger venues like House of Blues, where I last saw them back in 2010. Now they’re playing fucking arenas. I’ve been a fairly hard-core fan since the beginning when they were a rugged garage-blues duo and still consider 2003’s Thickfreakness to be the apex of their sound. But don’t expect any rock & roll class warfare or cries of “sell-out” or any of that indie abandonment rancor here. I believe, without condition, that the Black Keys should be where they are right now. My sweet disbelief is that, in spite of the steep odds and dumb dynamics of the popular music machine, it actually happened. 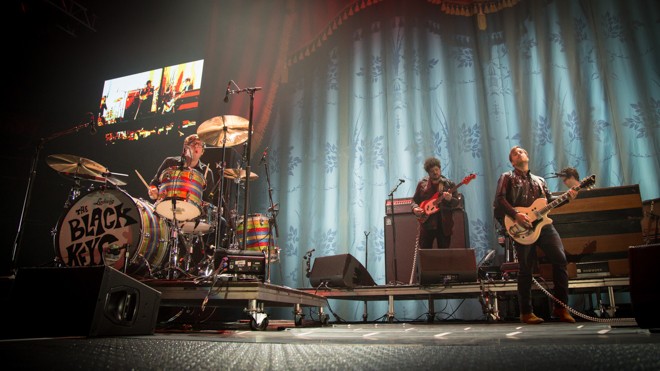 Besides my first time seeing them as anything more than a true two-piece, their recent step into the big time (Dec. 17, Amway Center) started out in front of a fairly basic painted background, which is fine. The Black Keys didn’t rise on the wings of props or spectacle. But after a few songs, that sheet came down in a crowd-wowing drop to reveal a massive light and video backdrop that was a dynamic and flashy mosaic of moving screens. It’s impossible to deny the power of such deluxe presentation combined with thousands of people dancing and singing along, and it’s pretty inspiring to see a band like this get that sort of rock-star treatment.

Still, there were some growing pains with their new stature in terms of show delivery. This set list wasn’t their best, opting for lots of adequate rockers over some of their greater but slower, more soulful songs – perhaps a sign of shaky confidence over how well they’d go over in an arena. A nice bonus, however, was their turbo-charged cover of Edwyn Collins’ “A Girl Like You.” I-Bar would be so proud.

In truth, the Black Keys are not the same band as when they began. But they’ve made the crossover without compromising their standard. That’s not exactly an easy thing to do. History is paved with good bands that’ve had to retreat back to the indie ranks to reclaim quality or just simply sold their souls. The thing the Keys have stuck to, however, is modernizing the classic American sound. They just did it well enough to ultimately define it and become one of the greatest bands of their time. So how about I just stop asking how and just enjoy the redemption?