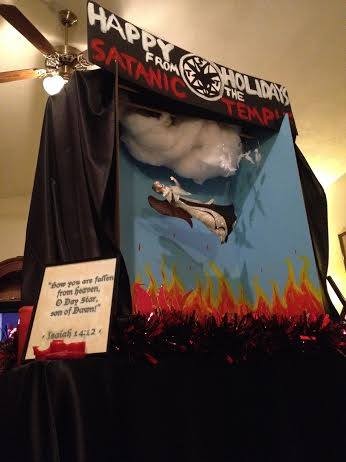 The Satanic Temple, a New York-based group that doesn't really worship the devil, put up a crudely made diorama in the entry rotunda of Florida's Capitol on Monday.

The only dispute involved a brief dustup with a state official over the exact spot on the floor to place the display.

The falling-angel diorama, which a year ago was barred from the Capitol because it was deemed "grossly offensive" by the Department of Management Services, is the latest in a series of irreverent holiday displays from groups motivated by the state's acceptance of Christian nativity scenes the past two years.

John Porgal, a Tallahassee resident and member of the Satanic Temple, said the group threatened legal action this year if it again was blocked. It also offered not to put up its display if the Florida Prayer Network and International House of Prayer Tallahassee wouldn't put up their nativity scenes.

"If the nativity scene never came in here in the first place we would never had done this," said Porgal, who is also a member of the American Atheists of Tallahassee. "We don't want to be insulting. We just want our rights, the separation of church and states or equal rights."

The group's name, the Satanic Temple, is simply to draw attention to its efforts.

"The Satanic Temple does not worship the devil in any way, shape or form," Porgal acknowledged when asked.

The temple's display this year joined entries from the American Atheists of Tallahassee, the Madison, Wis.-based Freedom From Religion Foundation, the Church of the Flying Spaghetti Monster, and a South Florida political blogger who for the second year put up a 6-foot stack of empty beer cans to represent Festivus, a sitcom-based festival "for the rest of us."

State officials, when asked the past couple of weeks about the temple's inclusion in the Capitol, have either deferred to the Department of Management Services or turned the topic to the more irreverent Festivus pole, which gained a national audience in the sitcom "Seinfeld."

In reaction to the glut of holiday display applications this year, the department imposed a new seven-day timeline for items put up in the rotunda. Applicants face a fine starting at $100 if a display remains after its scheduled removal date.

The Florida Prayer Network's nativity, which went up Dec. 15, was taken down Monday. Nearby a framed poster of the nativity by the International House of Prayer Tallahassee was put up Monday.

Both groups are represented by Pam Olsen, who questioned the motives of those opposed to the nativity scene but said she supports the open forum for holiday displays.

Olsen added she wouldn't remove the nativity scenes if that would keep out many of the more "outlandish" displays.

"They're here to shut down Christianity," Olsen said. "They're fighting for the separation of church and state. That's what their whole premise is. They're here to fight the display of Christ and Christmas. Whether we have a display here or not, guess what, Christ is in Christmas."

Olsen noted that the opposition groups have been silent regarding the placement of a Hanukkah menorah or Christmas trees, which have been displayed for years on the first floor of the Capitol.

The menorah is up this week inside the rotunda. The trees are inside the entries to the offices of the governor and the members of the Cabinet, the same as in past years.

The temple's display includes the phrase "Happy holidays from the Satanic Temple" atop a diorama of an angel falling into hell. On Monday, the temple demanded its table-top display be placed in the middle of a hallway leading toward the offices of Attorney General Pam Bondi and Gov. Rick Scott.

The spot had been occupied by the Florida Prayer Network's wooden nativity scene.

A Department of Management Services official told Porgal that the display needed to be closer to a column, a couple of feet away and out of the central walkway. After Porgal vehemently protested, the official departed without speaking to the gaggle of media attending the temple's arrival.

"We wanted to make sure we got front and center just like the manger scene did," Porgal said.