Check out our gallery at the link below to get an idea what it looks like: 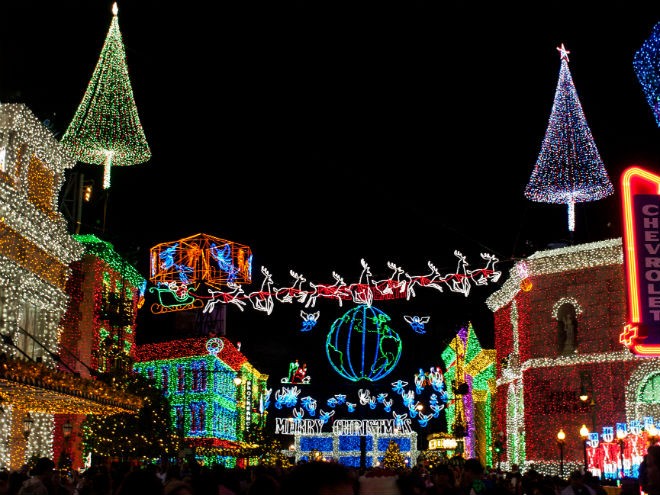 There's kind of a cool story behind the display that makes it a little more interesting than most holiday light shows, though. It started out as one man's front-yard Christmas tradition, but it ended up as a Supreme Court case before Disney finally purchased it in 1995.

One Christmas in the 1980s, Little Rock, Arkansas, businessman Jennings Osborne decorated his home with 1,000 lights for the holiday season. It became a beloved Osborne family tradition, and every year, he added to the display. He maybe got a little bit carried away when he purchased two properties adjacent to his home and decorated them, as well, because he'd run out of room in his own yard.

By 1993, Osborne had created a massive holiday lights extravaganza that included 3.2 million lights and attracted so many visitors that it caused traffic jams and irritated neighbors, who eventually filed suit in county court, claiming that the display was a public safety issue because during its busiest hours it blocked emergency vehicles from being able to get down the street. (The display also blew out a transformer one year, causing an entire neighborhood to lose power.)

"I put lights on our tire swing, on the grill," Osborne told Allears.net in a 2002 interview. "Anything that didn't move."

The county court told Osborne that his display, which he had a habit of keeping up for more than 30 days a year, had to be limited to 15 days per year, and it could only be lit from 7 p.m. to 10:30 p.m. Osborne appealed to the Arkansas Supreme Court, then the U.S. Supreme Court, but he lost both times. Finally, in 1995, he closed the massive display – which was said to have contained a globe, a carousel, a 70-foot-tall lighted tree and dancing angels, among other things – for good.

Check out what it looked like in its natural habitat in the video below.

In 1995, Walt Disney World bought Jennings' entire set up and revived the Osborne tradition at Hollywood Studios. Each year the display grows bigger, but it still includes all of the Osborne family's original pieces – including a lit razorback hog (Osborne was a big Razorbacks fan) and stockings representing each member of the Osborne family.