Beth McKee’s First Thursday Songwriter Series has been going for some time now and, apparently, it’s not some obscure little gathering that matters only to its members. No, this is a pretty big thing, in fact. Local musician Beth McKee curates it with discernment and, consequently, it showcases some pretty serious area talent. To celebrate its 2014 run, the series just held a “New Year’s Roundup” (Jan. 1, Smiling Bison). 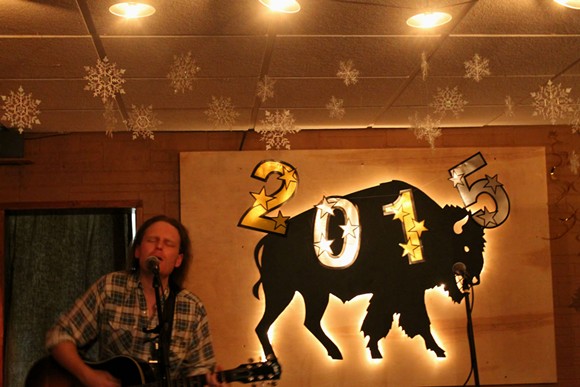 Upon entry, the place was a hive buzzing with lots of familiar songwriter faces, many of whom I've already showered in roses. Over the course of this blowout special, a dozen of them would perform. Of the eight performances I saw, the best were no surprises, including Beartoe, Kattya Graham and Jackson and Forrest Rodgers. Wheeler Newman – who’s been decent with a band – really shined solo, sounding more assured than I’ve seen of him before. In recent years, Justin Beckler has been spending so much time in the producer’s chair for many of Orlando’s notables that seeing him work his own distinguished rustic soul behind the mic is a rare treat, and it one I was able to see here.

But goddamn, Daniel Hanson (Fat Night, Fast Preacher) commanded it stronger than anyone else in the time I was there. Seeing how much steeze and butter he was able to muster up there just by himself, it’s clear this kid is now packing rare star power. He’s come a very long way in a relatively short time to become one of the city’s smoothest soul slingers.

In sum, this was one of the most credentialed local singer-songwriter lineups I’ve ever seen. Almost just as important was that it completely packed the place out. Between its championing of the songwriter and its prestige in the community, McKee’s First Thursday Songwriter Series offers one of the most vibrant and concentrated slices of Central Florida’s top songwriter talent. The next one is Feb. 5 (The Smiling Bison).