Ain't my lookout, but ... the Grifters will headline Ralphfest 4 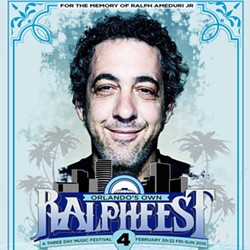 If you're a music nerd, odds are good you really liked the '90s and you probably miss them almost as much as Ralphfest's throng of supporters misses the festival's namesake, Ralph Ameduri. Good news, then: Influential '90s Memphis indie rockers the Grifters (who reunited in 2013 for the first time in 16 years) will headline this year's festival (Feb. 20-22, multiple venues). Any Sub Pop loyalist should be positively reeling at this news, but if you're unfamiliar, you have plenty of time to dive into Grifters goodness before next month.

Spotify is annoying and seemingly only has their last two records available to stream, 1996's Ain't My Lookout and 1997's Full Blown Possession, but it's their third LP, 1994's Crappin' You Negative, you might want to hang out with most, as it frequently makes taste-makers' lists (like Paste's) of the best albums from the '90s. To find that and their other great releases, you'll have to search under "Grifters" and not "The Grifters" (Insert Rodney Dangerfield-face: Spotify doesn't disrespect the Pixies or the Melvins with such chaos!) or you can just stream almost all of it at the playlist here:

The sweet part is that's not even the only cool announcement that Ralphfest dropped early this year: Hip-hop royalty Blowfly makes his return to Orlando for Ralphfest after collaborating last year with local-guy Sleazy McQueen for a single we loved last year, The Walking Beat. Before that, we hadn't heard a peep locally from Blowfly since his show at Will's Pub in 2013, so we'll be stoked to see that freak flag flying for Ralphfest, too.