Greyhound racing in Florida to be discussed during 2015 Legislative session 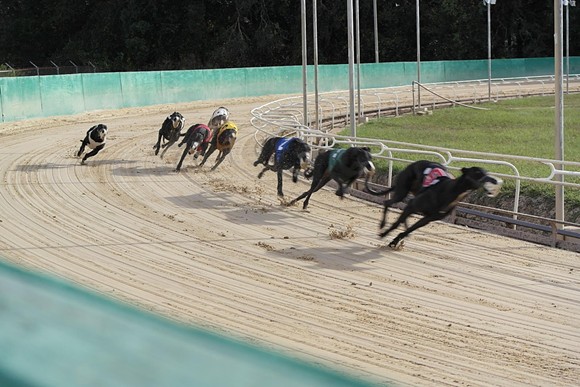 When the Legislature reconvenes in March, the controversial topic of dog racing will be on the agenda. So far, four bills (two in the Senate, two in the House) dealing with the state's greyhound-racing industry have been filed for the session. Each of them would require that the operators of greyhound tracks and kennels do more to protect the dogs in their care.

One of the bills, called the Greyhound Safety Act, would require that any injuries to racing dogs be reported to the state (currently, tracks only have to report deaths), increase penalties for using "impermissible" drugs to enhance a dog's performance and prohibiting anyone who has animal cruelty, child abuse or felony assault charges on their records from obtaining a license to race the dogs. The bill would also require track owners to maintain safe conditions for the dogs. The other, being called the Victoria Q. Gaetz Racing Greyhound Protection Act, is primarily concerned with the reporting of injuries to racing dogs.

According to a recent report from Al Jazeera's news network, owners of tracks and betting parlors are seeing a decrease in interest in dog racing (much like Jai Alai, it's often considered an antiquated activity), and some say they wouldn't mind if the state decided to "decouple" greyhound racing from other gambling activities. Currently, in order to maintain a legal betting parlor, the owners of dog tracks are required to race the dogs to maintain their licenses for other forms of gambling. In the 1990s, to help boost the flagging greyhound-racing industry in Florida, the state agreed to allow track owners to open for other kinds of gambling. In some places, tracks are allowed to have poker rooms, for instance. (The Sanford Orlando Kennel Club, which operates a dog track in Longwood, does not have a poker room, due to Seminole County ordinances. It does offer live simulcast of thoroughbred, harness and dog racing from other tracks around the country, however.) In exchange the tracks had to keep offering dog races, which are actually money losers rather than money makers, say some track owners, and the facilities rely on other forms of gambling just to stay in business.

Over the years, bills have been introduced in the Legislature that would allow track owners to reduce the number of races they're required to hold (or eliminate them completely), but they keep failing. Why? Because powerful gambling interests that lobby at the state level and currently have a monopoly on certain types of gaming – namely, the Seminole tribe, which operates lucrative gaming facilities in the state, including the Seminole Hard Rock Hotel and Casino in Tampa – don't want to see a rise in competition to their gambling empires.

What do you think about the sport of greyhound racing in Florida? Should it continue with additional regulations? Or should the state take a stronger stance against it? Tell us what you think in the comments below.