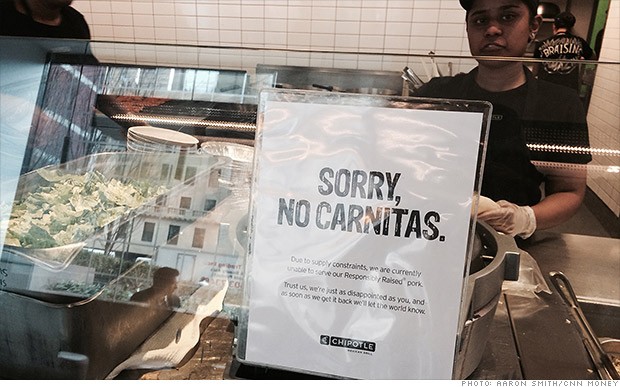 Say it ain't so. Chipotle has had to take their deliciously calorific carnitas off the menu for an unspecified amount of time after a pork supplier was found to have violated their company standards.

The AP reports that "Chipotle spokesman Chris Arnold ... said most of the issues related to the violations concerned the housing for the pigs. Chipotle demands that its suppliers raise pigs in humane conditions with access to the outdoors, rather than in cramped pens."

"We cannot get enough pork that meets our responsibly raised standard for all our restaurants, and we will not be able to serve carnitas in some locations," Arnold said.


Of course, those standards are admirable, and if you eat meat, it's even tastier knowing it comes from a a sustainable operation. Or maybe this is all just a ploy to get people to try sofritas? Hmm ...

UPDATE: On April 8, four months after they first pulled the pork, Chipotle admits they still haven't solved their carnitas problem. Spokesman Chris Arnold says, "We want to fix this pork thing," Arnold said. "One way or another, we will get this done." But so far, it's not easy for a company that does business at the scale that Chipotle does to find reliable sources of humanely raised meat.

"There are no quick fixes for it," Arnold noted. "There isn't a switch you can throw and serve all organic veggies and all humanely raised meat at our size and scale."

When Chipotle still does not have Carnitas. My face right now 😢 pic.twitter.com/2pnaDeH1ON

And don't even think about taking away our guacamole, Chipotle.