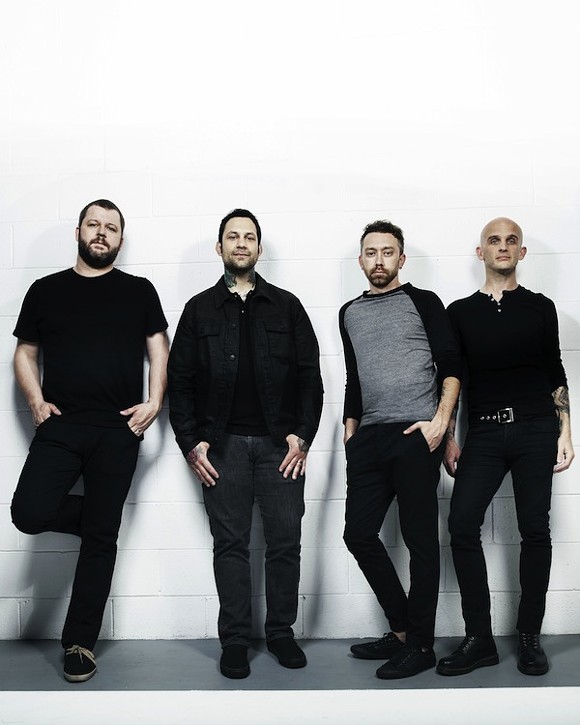 Rise Against’s latest album, The Black Market, has arrived at a time when some observers think the band may just be a radio hit away from being the next punk band to break through to major mainstream popularity.

Already, one of the most successful punk groups on today’s scene, Rise Against can headline arenas in some markets (like Orlando) and fills theaters and large clubs on others. Meanwhile, The Black Market debuted at No. 3 on Billboard magazine’s album chart when it was released in July.

But Rise Against guitarist Zach Blair doesn’t sound concerned at all about chasing after arena-headlining success.

“I never expected to be in a band this big, as big as it is,” Blair says. “I dedicated myself to punk rock music, to aggressive, fast, heavy music. And I realized what I was getting myself into when I did that. So we lucked out. And if it gets bigger, then awesome. That means it got bigger on the back of a band that was staying true to itself and always putting out music that we all four liked, not music that people were telling us we needed to be playing and not following some trend, some fashion trend or some trend in modern music. We got there just being who the band is, which is Rise Against, so that would be great. But if it doesn’t and we have the career that we have (now) or even a lesser career than we have, we’re OK with that, too. All I know is that tomorrow or whenever, I’m going to go play a show.”

As Blair suggested, his group has built its audience without compromising its music. That’s notable because Rise Against has been one of rock’s most outspoken, issue-oriented bands, using its songs to cover a host of political and social topics, including human rights, capitalism and war. Not to say that there haven’t been successful political bands – Rage Against the Machine and Midnight Oil are among those that broke into the rock mainstream while being plenty opinionated about issues facing people at home and around the world – but most acts that enjoy million-selling popularity keep lyrics light and stick mainly to matters of the heart.

Blair, who has now become the only guitarist in Rise Against’s history to make three albums with the band, joined the group in 2007, just as the group’s popularity was beginning to accelerate.

Formed in 1999 in Chicago by singer-guitarist Tim McIlrath and bassist Joe Principe (drummer Brandon Barnes is the other band member), the group released two albums independently before landing a major label deal with DreamWorks for their third album, 2004’s Siren Song of the Counter Culture.

Blair joined after the release of Rise Against’s fourth album, The Sufferer & The Witness, and has gone on to see the band’s audience continue to grow as each subsequent album – 2008’s Appeal to Reason, 2011’s Endgame and now The Black Market – has enjoyed a top five debut on Billboard’s album chart.

The Black Market arrives after Rise Against hit a transition in its career and went on hiatus for a year – the first time the group had taken an extended break in its career.

“Before I was in the band, I just admired the hell out of them because they never stopped, “ Blair says. “They were in a van a lot longer than most bands are in a van. A lot of bands graduate to a bus. These guys stayed in a van. They just kept going. They were always out. They were always on tour. And when I got into the band, it was like jumping onto a moving train. I might as well have just put my stuff in storage. It never stopped. It was just tour, record, tour, record, tour, record. We would take six months off and in that period make a record, and then start again.  That’s how we did it.”

But by the time of Endgame, the lives of the band members had evolved. Blair’s three bandmates all had become fathers and had been away from home, for the most part, while their children grew from babies into kids. Blair himself had married. It was time to jump off the rock & roll train and spend some time living a family life.

“It wears on your psyche,” Blair says of the band life. “You’re constantly gone. You don’t feel like you live anywhere. Like the guys with children, that’s obvious. You just see them on the phone for hours putting out fires at home and kids (are) having a meltdown. So it (the break) just needed to happen. And it’s a tricky thing. It’s an interesting thing to kind of realize that and kind of get out of the bubble, get out of the bus, and go ‘Oh, geez, we actually have lives outside of what we do.’”

But like any working band, Rise Against couldn’t check out forever, and in January, the group reconvened to start work on The Black Market with long-time producer Bill Stevenson (of the bands the Descendents and All).

In Blair’s view, Rise Against pretty much picked up musically where they left off on Endgame.

“To me, it’s just the Rise Against album that these four guys made at this stage of the band’s career,” he says.

That said, a few things evolved, including some subtle changes in the playing of the band members and the influences they bring into the band. For Blair in particular, one new wrinkle was the opportunity to do guitar solos in a few of the songs (including “Methadone” and “Zero Visibility”).

“Hey, I’m a guitar player. I grew up practicing scales and doing hammer ons andlistening to lead guitar players, reading Guitar Player magazine,” Blair says. “And so I’ve always kind of looked for an avenue in this band to do that … So me personally, that was something I was able to do and I was excited about it.”

For the most part, though, The Black Market delivers just what Rise Against fans expect from the band – urgent, passionate and hard-hitting – yet catchy – punk-edged rock & roll, with standout songs like “I Don’t Want to Be Here Anymore” (the first single), “Awake Too Long” and the title track leading the way. And yes, lyricist-chief songwriter McIlrath remains tuned into the issues of the day, frequently using apocalyptic imagery to express himself. On “The Great Die-Off,” he bemoans wars that have lasted for generations between nations and within cultures, hints at a rebellion against economic injustices on “The Eco-Terrorist in Me” and takes armchair critics to task on “A Beautiful Indifference.”

After playing festivals overseas this summer and then following that with a headline tour of the states, Rise Against begins 2015 opening for Linkin Park on their arena tour. While the band’s set figures to essentially be filled with fan favorite songs, Blair says the group might put a surprise or two into the show.

“You get people asking for the old favorites and for us there are so many songs that have never even been played live,” Blair says. “And geez, we don’t even know if we can play them. We have never tried them. So we’re thinking about (playing) some of those.”