There’s a new downtown music series now in play that everyone who cares about forward music should take note of. The In-Between Series, which just debuted (Jan. 12), is a monthly event at the Gallery at Avalon Island. Instead of the upstairs auditorium that used to be DMAC, the performances will take over the main floor of the street-facing gallery. The idea for the series sprang from an inquiry by Attached Hands mastermind Henry (just Henry please) to gallery director Pat Greene about using the warm, airy space for a music performance between exhibitions when no art is displayed, hence the series name.

The six-man assembly began on warm wood instruments that they played like a heterogeneous orchestra, each unique part constituting a composite whole. Then they commandeered conventional drum kits like a crew team to explore percussive Venn patterns. Finally, they moved into a free-form segment that played like a spontaneous six-way rhythm conversation. There’s an organic intelligence that’s singular to group drumming and Anderson’s sextet illustrated it intriguingly in various phases.

But before you go thinking this is some ivory-tower parade of esoterica, the In-Between Series is actually looking a lot like a great musical bridge between the avant-garde and indie scenes, an important local conduit that seems to be strengthening. Featured acts, already confirmed through the summer, include local modern music marquee names like Attached Hands principal Henry (with noted indie-rock drummer Tyson Bodiford, Feb. 16), Maximino’s Gerald Perez (Mar. 16), Jim Ivy (May 18), Benoit Glazer (Jun. 15) and Steven Head (Jul. 13) alongside a special Accidental Music Festival presentation of NYC’s Joseph Di Ponio (Apr. 13). Moves like this forge mutually cultivating connections that improve the artists, the community and the overall level of culture in the city. 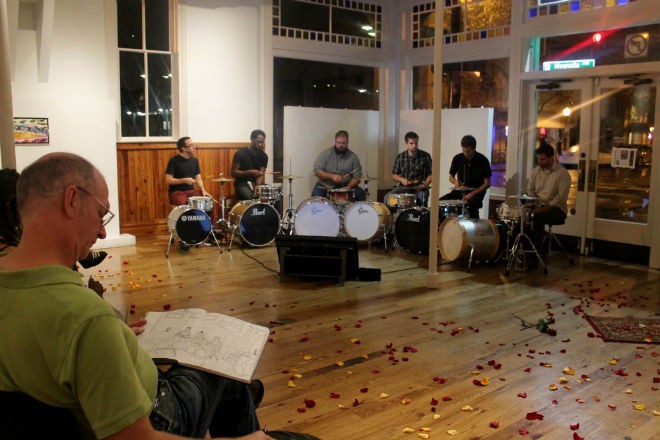 The debut event was a layer cake of art, formally with an accompanying installation by local artist Ashley Inguanta and informally with movers like local on-scene illustrator Thomas Thorspecken (analogartistdigitalworld.com) capturing the proceedings like only he does and Benoit Glazer (of Timucua White House and Cirque du Soleil) video-documenting the performance. It’s an extraordinary amount of creative energy to squeeze into an intimate, casual and public affair – and it was a cool scene. Fans of music as art, mark your calendars now. Since the performances are free, at least for now, put extra consideration into donating to the gallery.