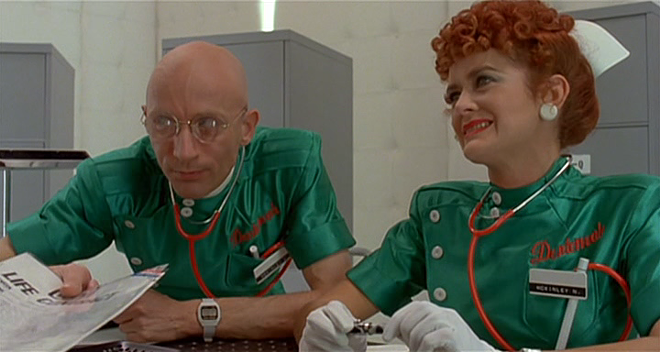 People have been hosting campy screenings of The Rocky Horror Picture Show for decades, and the cult film compels moviegoers to come dressed as their favorite characters, ready to shout along with their favorite lines and songs and a mysterious collective over time even developed a specific script of responses to shout at the screen at specific points in the film (catalogued on fan sites like this, if there are any curious virgins reading). But the film's director, Jim Sharman, followed up Rocky using his offbeat formula to create Shock Treatment, which pulled in some of the same characters and actors six years later, but rarely is revered with the same fanaticism of its transexual predecessor. Good thing local songwriter Marc With a C is exactly the rare gem of a guy who would schedule a free screening of Shock Treatment and he's done so at the Geek Easy at 8 p.m. Thursday, Jan. 22. (RSVP!)

Show up ready to sing along with Shock hits like the title track and "Anyhow, Anyhow" while Marc With a C leads the chorus, and don't forget to collect your raffle tickets (one per drink!) as you drown yourself in beer so you can get through the snubbed cult film that many (who would probably prefer to do the Time Warp again!again!again!) considered a misstep.