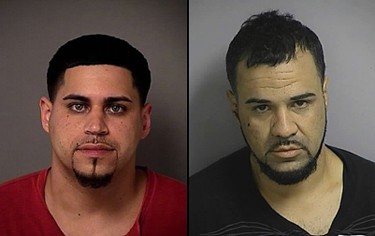 Here's one for the #floridaman archives: The Smoking Gun reports that two Kissimmee men were arrested after a bag of cocaine they tossed out of the sunroof of the vehicle they were driving landed on the hood of a police car following them. Kissimmee police department officer Christopher Breuer says that a gold Acura almost slammed into his cruiser at 2 AM on the morning of Jan. 15. He turned on his overhead lights and attempted to pull the Acura over, but it didn't stop. So he then threw a spotlight on the vehicle and noticed the person in the passenger seat opening the sunroof and reaching up to throw something out of the car.

Breuer says he then saw a bag fly into the air and land on the hood of his cop car. When he stopped to see what it was, he says it was a baggie full of a white powder he identified as cocaine. Breuer got back in his car and followed the vehicle until it pulled into a 7-11, where he confronted the driver, who then blurted out that the baggie (which the officer hadn't even mentioned to him yet) wasn't his.

Needless to say both the driver and passenger, Luis Vazquez and Jose Vales, were arrested.