Letters to a Satanist: If we're not a Judeo-Christian nation, where do our laws come from? 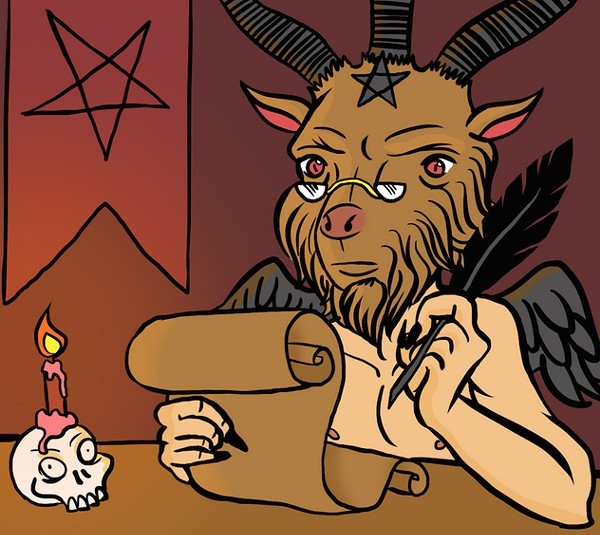 If we are not a Judeo-Christian nation, then where do our laws come from?

There is a clear lack of intellectual merit in the question that might ordinarily render it unworthy of response ... however, the inquiry now carries the weight of theatrical populist outrage – falling, as it did, from the quivering lips of popular apocalyptic pundit Glenn Beck, who presented it last week in the context of a tirade against The Satanic Temple (TST). As Beck is no common fool, but rather a prominent fool with a significant national audience, it seems appropriate to address his concerns as indicative of the simplistic mindset of his wider fandom.

Beck found himself hysterically disturbed when TST was approved to place a holiday display in the Florida Capitol Rotunda last month, prophesizing imminent destruction as a result. Failing to reconcile his anti-constitutional stance against free expression and religious liberty with his pretenses to patriotic constitutional fidelity, Beck openly admonished Florida for not acting as arbiters of proper religious practice. (Later, Beck went so far as to praise a woman for her petty, criminal vandalization of the display.) Last week, when Beck learned of TST’s Satanic Activity Book – designed to counterbalance the dissemination of Evangelical materials in public schools – he took to the air to have a serious heart-to-heart with his public. Impressing us with his statistical knowledge, Beck conceded that upward of around 10 percent of the nation are nonbelievers. According to him, however, the remaining 99.993 percent are indeed Judeo-Christian, and therefore “we” are a Judeo-Christian nation. Then he asked: if we are not, in fact, a Judeo-Christian nation, where do our laws come from?

Simple-minded as it may be, there is no simple answer for such an ill-informed question. The question itself begs many questions of its own. Why would the United States necessarily be a Judeo-Christian nation in order to have established laws? Beck seems to imagine that American law itself is based upon the 10 Commandments, citing prohibitions against lying, cheating (though there is no commandment against cheating) and stealing as foundational values that the 10 Commandments have provided us. But who could believe that such values are unique to Judeo-Christian culture? What of the pre-Christian and tribal cultures (unstained by missionary influence) that have respected this universal morality? And, if the United States were truly based upon the 10 Commandments, why does our very Constitution contradict the first four (which explicitly place prohibitions upon religious liberty and Free Speech)? And why are only three (killing, stealing and bearing false witness) actually illegal in U.S. Law?

Beck cites the fact that there is an image of Moses within the Supreme Court itself as evidence that our laws are based upon his archaic, unconstitutional tablets. What Beck doesn’t mention (and likely doesn’t know) is that many historical “lawgivers” are equally represented in the Supreme Court’s interior decor, including Confucius, Hammurabi, and Muhammad, to name just a few. (Incidentally, depictions of Joseph Smith, Prophet of Mormonism, Glenn Beck’s own religion, are nowhere to be found.)

Above the steps to the Supreme Court, one can see the engraved phrase, “Equal Justice Under Law.” It is this value, this Constitutional virtue, that The Satanic Temple seeks to uphold with its political actions. And, despite whatever dissembling revisionism or ludicrous fabrications Glenn Beck tries to adorn with his empty, false patriotic rhetoric, he stands in complete opposition to our most basic Constitutional values. Our secular laws were written by people of reason. Claiming they came from “God” violates their letter and their spirit, as well as the intelligence of the entire discourse.