Sure sure, there's going to be football on the TV, and some of your guests might even care about the game. But you know: The reason for the season is cheesy, melty, sizzling, overloaded nachos.

Truly epic nachos take a bit more work than just nuking some bagged shredded cheese over a plateful of Tostitos, but it's so worth it. Peruse the following recipes for a taste of nacho heaven.

Bon Appetit’s ambitious recipe for Nachos With All the Fixings (that’s them at the very top) actually involves four pre-assembly subrecipes (including beer-braised carnitas – and you know how we feel about carnitas – above), but if you want perfection, you go with the best, don't mess with the rest. 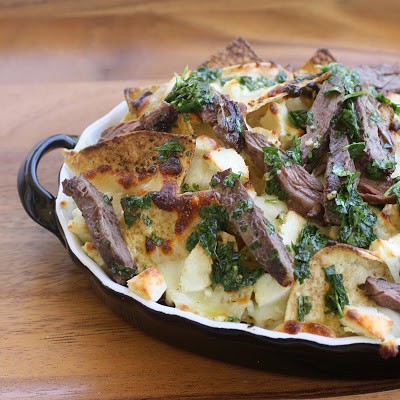 Jane-Anne Hobbs' recipe for Thief-proof Nachos Towers with Avocado and Mint is clever and creative, guaranteeing the perfect mix of ingredients in every bite – and it's extra good if you have a touch of the OCD. (That assembly process!)

We found this recipe for Greek Nachos, using pita chips instead of tortilla chips, tzatziki instead of sour cream, and a luscious-sounding Greek-spiced ground lamb instead of the ubiquitous "taco meat," over at Chicago food blog Elly Says Opa! And if there's a town that knows sportsfood, it's Chicago. (Just one question, though: Why is feta not a part of this party? Please add feta.) 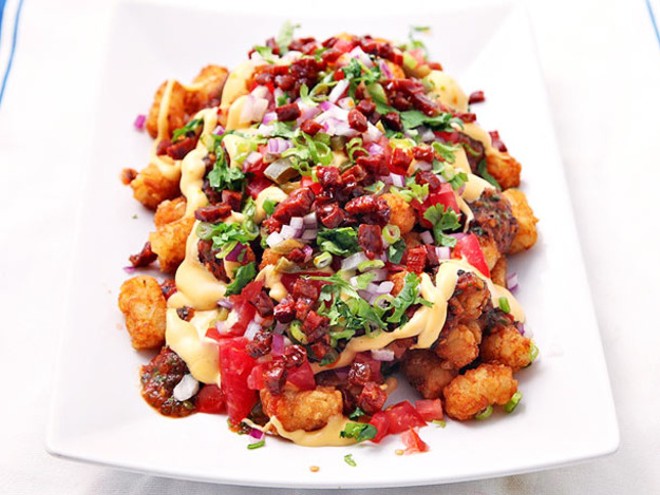 The awesome J. Kenzi Lopez-Alt wrote this recipe for Totchos and describes it as “so gut-wrenchingly glorious, so decadently delicious, so damn greasy.” Topped with charred-tomato salsa, chorizo and pickled jalapeños, these tots are an indisputable crowd-pleaser.

Indian-Style Nachos with Warm Spices and Tamarind Chutney: another BA recipe, another batch of subrecipes, another plate of heaven.

You can tell yourself you're making Serious Eats' Loaded Baked Potato Nachos because you're avoiding gluten, but we all know it's just for the sheer mashup joy of the potato-chip base topped with sour cream, cheddar, bacon and scallions.