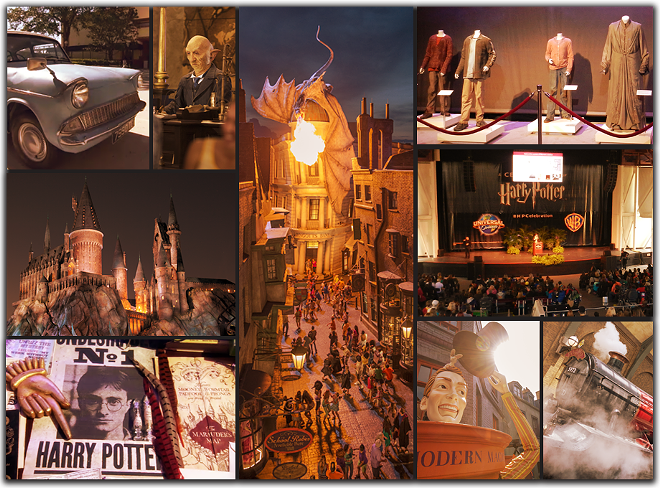 Calling all Harry Potter fanatics: This weekend is Universal Orlando’s second annual A Celebration of Harry Potter. The event takes place over the span of the next three days, so prepare for a massive butterbeer hangover on Monday. Fans will have the opportunity to indulge in Q&A sessions with castmembers from the Harry Potter movies, including Michael Gambon (Dumbledore), James Phelps (Fred Weasley), Oliver Phelps (George Weasley) and Evanna Lynch (Luna Lovegood). Keep an eye on our Twitter feed Friday night, where A+C columnist Seth Kubersky is live-tweeting the media preview.

If you’ve been wanting to duel and master wand combat, then you’re in luck, because Paul Harris, the world’s only wand combat choreographer, will do a live demonstration and teach a wand-combat masterclass, and illustrator Kazu Kibuishi will be drawing Potter characters during an interactive panel. Other cool features include Harry Potter film trivia, film props and exhibits from Scholastic, Pottermore, Warner Bros. and more.

That’s the good news – the bad news is that one special guest who was supposed to appear at the celebration event this week, actor Robbie Coltrane (Hagrid), may not make it to Universal at all. TMZ, the BBC and Fox News report that he experienced flu-like symptoms on his flight, and he was rushed to Florida Hospital in Orlando for treatment.

You can access this event with a regular admission ticket, but admission to the special events will be granted on a first-come, first-serve basis. If you have a park-to-park ticket, enjoy a ride on the Hogwarts Express to get from Hogsmeade to Diagon Alley. Events begin as early as 9 a.m. and end around 6 p.m., so it’s important to get your beauty rest prepare for a full day of Harry Potter-ness.

Don’t forget to bring your favorite Potter item, along with a sharpie, because autographs!