This Little Underground: Antibalas & Zap Mama at House of Blues 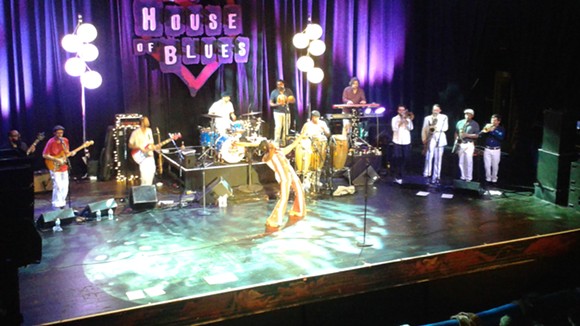 Even more than its pedigree, the core virtue of Brooklyn’s Antibalas is that they’re a true multi-culti band that's managed to escape the dilution of fusion. Instead of the well-intentioned but often arbitrary Frankenstein impulses of worldbeat, Antibalas’ progressive Afrobeat infuses Latin and American sounds with precision and depth. It’s not just a loose and quick scramble but a thoughtfully honed thing that simultaneously stays true to the individual forms while harmonizes them into a tailored new sum, something their recent performance (Jan. 25, House of Blues) certified in grand fashion.

Although this isn’t necessarily emblematic of that per se, they did throw in an awesomely weird cover of Rockwell’s “Somebody’s Watching Me” into the middle of the set.

But before the sprawling Antibalas army occupied the stage, Zap Mama warmed it from the ground up. This polyphonic voice-based project of Congolese-Belgian singer Marie Daulne is no barbershop quartet or doo-wop act – it’s a fine-tuned, high-level chorus of exceptional breadth and precision. The four ladies had harmonizing that could pass academic muster but with the dimensionality to even handle their own beatboxing. The result was Afro-Pop done with uplifting elegance and real swag. 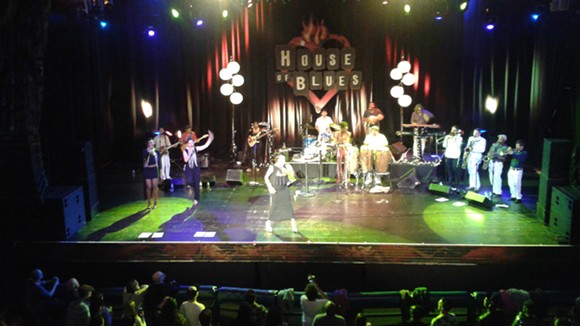 Zap Mama began their set a cappella and then slowly added instrumental accompaniment layer by layer. Eventually all dozen or so members of Antibalas became their backing band. From there, the transition into Antibalas’ main set happened without pause or seam. Zap Mama was even brought back out to become part of the Antibalas ensemble and vice versa throughout the night, all woven into an unfolding but unified groove.

Unfortunately, it wasn’t the biggest turnout . But it was a good-vibing crowd that converted all that musical spirit into a dance marathon, sucking the marrow out of the unlikely circumstance that Antibalas and Zap Mama would combine to become the house band for what ended up being a surprisingly intimate and up-close party. For those of us who were there, it was pretty amazing.