JEB PUSH: More fun in the middle ground with the Republicans' favorite candidate 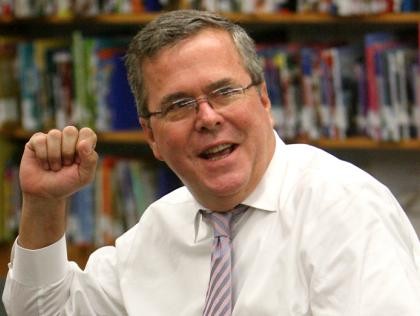 Though our favorite story to pop up in the past few days regarding presidential front-running charter-education magnate (who just so happens to be a star of Dynasty: the Nepotism Edition) is this one in which a couple of SELF-IDENTIFIED BEARS from Oregon have squatted on the JebBushForPresident.com domain in order to howl social justice, it appears that the Jebediah Bullfrog situation is actually being taken seriously in the, cough, MSM. He's the leader of the pack, after all, and, at least according to those who know the least about politics, a moderate. HAHAHAHA. Today we learned that Jeb is tied with Hillary (because we're all Cher now) in the 2016 foreplay stakes, according to a new Quinnipiac poll. Hillz has been making a better showing nationwide, so just because your uncle in Boca thinks that Jeb was a good time back in the oughts, that doesn't mean that he was a cheerful potato for everyone.

But he was something of a weed guy, we are now hearing? IS THIS A PLOY TO RACE TO THE MIDDLE ON MEDICAL MARIJUANA? Not really, unless you call the middle "Libertarian." Jeb has apparently hired on consultants who brought you the wonders of Ted Cruz and Allen West, so this is going to be a mixed-messaging bag. At any rate, a bunch of Tuesdays from now it's about to look like a certain Tuesday past when you pass your eyes across the ballot. Over the Hillz and through the Bushes to grandmother's Florida house we go...