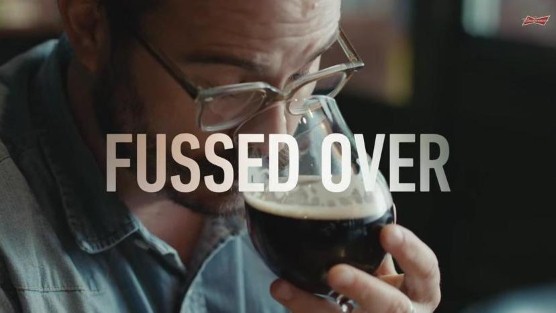 Craft brewers and anyone who loves their work have been hopping mad since Sunday, when Budweiser aired this Super Bowl ad:

Dubbed by Anheuser Busch "Brewed the Hard Way," the spot comes off more like "Shut Up, Weirdos" in its disdain for craft brewing. The words "Proudly a Macro Beer" are superimposed over towering steel tanks; shots of a hot barmaid and some thundering Clydesdale hooves follow, under the words "It's Not Brewed To Be..." — and then "...Fussed Over" overlays a shot of a waxed-mustached, vintage-glasses-wearing hipster prissily sipping dark beer out of a snifter. The full text of the ad runs thus:

Proudly a macro beer. It's not brewed to be fussed over. It's brewed for a crisp, smooth finish. This is the only beer beechwood aged since 1876. There's only one Budweiser. It's brewed for drinking. Not dissecting. The people who drink our beer are people who like drinking beer. To drink beer brewed the hard way. Let them sip their pumpkin peach ale. We'll be brewing us some golden suds. This is the famous Budweiser beer. This Bud's for you.


Ooh, pumpkin peach ale, is it? Somebody call the wah!-mbulance, because craft brewing just took a third-degree BURN.

Predictably, blogs and social media exploded with hot takes. "They'd have done better to stick with Clydesdales and puppies," said the Atlantic. "[Budweiser's] ads ... come off as aggressively insecure, and a bit hypocritical, since AB-InBev owns the much-beloved Chicago craft brewer Goose Island," said Slate. "Anheuser is so non-threatened by craft beer that it saw fit to spend $9 million on a 60-second Super Bowl ad just to make sure you were aware of that fact. Because that’s what a company does when it’s definitely not being threatened," said Paste. "It's hypocrisy, but that's not a problem for a company that has no real moral fiber," said Redlight Redlight bartender Teege Braune in an article by Tod Caviness, two of our favorite local drinking specialists.

And today, Hopstories, a production company that creates videos and ad collateral for craft brewers, fired back with their spoof of the Budweiser ad:


An excerpt: "Only craft beer is brewed by hand the actual hard way. We will savor our hundreds of styles, you keep pushing your one.”

OK, I would say "Your move, Budweiser," but maybe everyone should just go back to their corners and drink what they wanna. How about that for a solution? #stopfiring

This one by Ninkasi Brewing suggests the proper usage of Budweiser is beer bongs or simply pouring over your head, not drinking: