In case you hadn’t yet noticed, one of the core subtexts of this column is that small shows are the frontier. It’s a point I keep hammering because the amazing train of future names that’s been passing through right under your noses and radars shouldn’t just be the exclusive province of scene insiders. Get on in here.

The latest reminder of this is the return of Austin’s Boyfrndz (Feb. 10, Will’s Pub). They came through Orlando back in 2011 and totally fried my brain as a blind discovery at a little show at Uncle Lou’s (here’s the mark they left). They were a brand new act then. Now, they’re a signed band (on heavy Philly label Brutal Panda alongside certified ass-kickers like Whores, Black Tusk, Helms Alee, Cherubs and Kowloon Walled City), and they came back even bigger, better and more complete.

On multiple levels, Boyfrndz are magicians. First, they achieve the curious trick of being both intricate and monolithic. But more cosmically, their experimental rock manages to challenge convention without being an intellectual pill. Oh, they’ve got more than enough math for the geeks to chew on, but they can connect with the rest of us right at the viscera. That two-in-one there is a pretty rare rabbit to pull out of your hat, and it deserves all the world’s credit.

Boyfrndz were already impressive early on with just their music and raw energy. But they’re exponentially more so now with a grander, more finished sonic vision and a more striking live presentation with their own sharp lighting scheme. Don’t sleep on this upward band.

Caddywhompus, their New Orleans tourmates, also pack some wizardry of their own. Complex but not overwrought, the spirited tech-rock of this guitar-and-drums duo proves that angular dynamics and open, skyward melodies need not be mutually exclusive forces. Their approach is every inch as oblique as their name suggests, but rather than getting mired down in an academic labyrinth, they take to the air with minimalist arrangement and maximalist playing.

The night also offered a glimpse at a couple fresh new local bands. A last-minute lineup replacement, Crit turned out to be a juicy discovery. Comprised of members from notable acts like Jr. Meowzer, Flashlights and Surfin’ Serf, they actually began as a Weakerthans cover band for the New Year’s party at Cloud 9, according to frontman McCarty Johnson. An immediately bright band with real potential, they play beefy, driving ‘90s-style indie rock that not only allures with a gentle-but-loud sound but intrigues with unusual edges and surprises. This is one to watch. 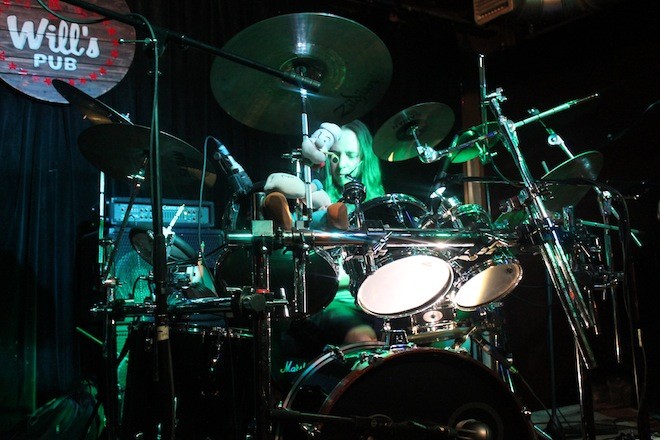 Opening the night was ambient post-rock band Lanterns. The first, most indelible impression they make is with that arena drum kit of theirs, which, depending on your sensibilities, is either sick or goofy. Either way, that degree of gear implicitly requires a certain license, and there’s still a lot of growing room to go for Lanterns to validate all that hardware.

The thing about technical rock like theirs is that it has a small margin of error. The training wheels will always show until it all clicks and not a second before. Right now, Lanterns’ playing has more notes than chops and their sound is more of a stilted, embryonic exercise than a real feeling. But let’s see what happens with more cooking.