The Walt Disney Company reminds me of that old friend from high school that you recently reconnected with on Facebook: cute kid, bad politics. Try as you might to bring that friend back to who they were in 1994, it ain’t happenin’. They very well may have been a racist jerk from the start.

Some of us cling desperately to better times; some of us just want to eat a corndog. With that in mind, when your old/new friend is posting pictures of Prince George or only mildly humorous blog posts about drug safety at Disney World (like that’s a thing), remember that we all share one common bond: food. If you find yourself at a Disney theme park any time soon, here are some picks for the best places to dump your hard-earned money, and some you should steer clear of.

As per usual, recommendations are based on a variety of very subjective criteria – so keep that in mind when you try to argue with me about Dole Whip.

Magic Kingdom:
DON’T: Decent food options are few and far between at the flagship park of the Walt Disney World Resort. Turkey legs are overrated (and rumored to be emu, not turkey). Dole Whips, while tasty, are really just pineapple soft serve and not worth waiting 30 minutes for. Yeah, I said it.

DO: The smart consumer's choice here is the sweet and spicy chicken waffle sandwich at Sleepy Hollow Refreshments, near Cinderella Castle. This is only served until 5 p.m., so be sure to get there on time. If you miss the cut-off or you're a vegetarian, the Nutella and fresh fruit waffle is a great alternate choice.

Epcot:
DO: Of all the parks under the Disney mantle, Epcot arguably gets the most culinary praise. This may be justified to a degree, but not at the current price points. Your best bet here is the Sunshine Seasons food court at the Land pavilion: Affordable prices. Decent food. Multiple options (including vegetarian). In fact, at least according to the Living With the Land boat ride, some of the food products grown at the Land pavilion are used at Sunshine Seasons. That means you get to go face-to-face with the relatives of the delicious fish tacos you just ate! I’ll be here all week, try the animatronic buffalo!

DON’T: French cuisine very well may be the pinnacle of culinary technique. None of that is evident at Les Chefs de France. Let’s just say it’s lacking a certain je ne sais quoi. No, that’s not it – what I mean is THIS FOOD IS AWFUL. When you are paying fine dining prices, you expect a little more than atmosphere. This restaurant is, without a doubt, the enfant terrible of the World Showcase food scene. 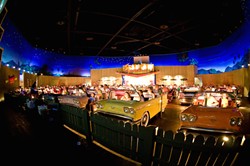 Hollywood Studios:
DO: If, somehow, you found a reason to be at Hollywood Studios for more than two hours and are starving to the point of sheer physical collapse, may I recommend the Sci Fi Dine In Theater. None of the food at Hollywood Studios is worth your time or stomach drama, but at least this place has ambience. Besides, who doesn’t want to eat a hamburger topped with a hot dog? Sci Fi has a decent vegetarian option as well, the vegetarian shepherd’s pie.

DON’T: Again, I’m not really sure why you are at Hollywood Studios unless you really, really love Aerosmith; but let me at least warn you of the dangers of the ABC Commissary. I have eaten a lot of bad hamburgers in my 38 years going to theme parks. (One of my father’s hilarious running jokes is that someday I will turn into a Disney burger.) The ABC Commissary has the Granddaddy of All Bad Disney Burgers – the 1/3 pound Angus cheeseburger with horseradish sauce and fried shrimp. It is worse than it sounds. Do you see a pattern forming here? Hollywood Studios really wants you to put something extra on your burger.

Animal Kingdom:
DO: Flame Tree Barbecue would be the pick here if it weren’t currently undergoing refurbishment for your future enjoyment. For now, there is a stand that serves some of the Flame Tree staples close by, but you might as well just go get wasted at the Dawa Bar and skip eating altogether at this park. It's even easier to drink responsibly at Animal Kingdom because they use environmentally friendly paper straws.

DON’T: In hell, they probably serve ribs from the Rainforest Café located just outside the park entrance at Animal Kingdom. This seems like a fun place to go. It’s not. Stay away. I warned you.

Disney Resorts:
DO: Eat at Jiko at the Animal Kingdom Lodge. It is way overpriced for what you get, but I’ve never had a bad meal there. Also, very few children get taken out for a $45 dollar steak dinner at Disney, so this may be your only shot at not smelling baby poo for a few hours. If the pricing is an issue, I recommend the food court at Port Orleans Riverside (which, troublingly, used to be called Dixie Landings … see, I told you that old friend has a dark side!).

DON’T: I used to think that cumin was a fun spice to throw on some pork and enjoy. That was until I went to Shutters at Old Port Royale at Disney’s Caribbean Beach Resort. For the sake of brevity, I'll just say that EVERYTHING at Shutters comes with cumin on it and there IS a reason I lovingly refer to this monstrosity of a dining establishment as “Shitters” now.